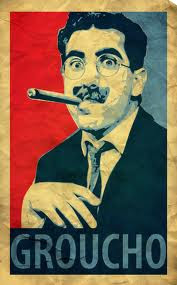 ... but of course, that was Groucho.  He also said, "I refuse to join any club that will have me as a member." He prophetically told us, "I intend to live forever... or die trying," which he did.

About how time flies though, doesn't it? How long is a minute? Does your week ever fly by? Ever watch a flower grow in a slow motion documentary... or a dog lapping water by curling the tongue under as it scoops? (Check it out on YouTube.) It's really neat how events happen so fast that our brain can't capture them... or so slow that they seem to go on forever.

"Is it our anniversary again?" Slap!

"Can dinner wait just a sec., hon, there is only a minute left in the football game? "

"Is it Sunday night already?"

Funny thing about time... it never seems to be what it is. It is either too slow... or too fast. Never just right. That's why time in the dentist's chair seems like it will never end, but time doing something fun is over before you know it.

I used to drive my kids 15 miles to school on some days.  When I was running late, I sped (not really officer) the back roads and could make it in 18-20 minutes. When we left early and had time to spare, I drove the same route, leisurely enjoying the scenery and conversation, at a much less-nervous pace. I usually made it in... 18-20 minutes. I never could figure that one out... and was never smart enough to become a same-speed wonder. Yet, the only difference seemed to be my anxiety and stress level.

There have been several studies trying to understand how real time sometimes seems to pass in slow motion. A pitched baseball reaches the batter at a specific speed, yet to a good batter--say Ted Williams--the ball almost moves in slow motion and becomes clearer. Some tennis players have made the same observation. Williams used to say he could actually see the stitches on the ball and note its rotation.

So is that how Keanu Reeves (who's first name means 'cool over the mountains' in Hawaiian... in case you wondered) dodged those slow motion bullets as Neo in the Matrix movies?

It has been speculated that real time and perceived time are seen differently by the brain. Could it be that we have a "capture speed" as the brain takes it in and an almost instantaneous "playback speed" that we digest with? 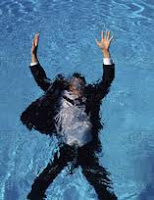 A later study seems to indicate that when we perceive we have to take action, we deem the durations to be longer than if we were not required to move. The conclusion drawn was that time only seemed to pass more slowly because the test subjects remembered it doing so... kind of like in a dream, I guess.

Might that explain how a drowning man's life could flash before him in an instant... or would that just reveal that the drowning man didn't have that much to remember?

Ever have one of those days when... ?

... you know, you learn lots of really interesting stuff but have no good use for any of it? It's kind of like being lost but making good time. I have days like that all the time. For example:

I know how to spell the winning word in the latest  U.S. National Spelling Bee... g-u-e-t-a-p-e-n-s... guetapens! I even know what it means: ambush. (It's French, of course. They have a different word for everything.) Then I use it in a sentence during a very important cocktail party conversation: ... and the cattle rustlers took the short cut, just as the sheriff and posse thought they would, and they rode right into a guetapens.
Sacre bleau! Hey, where did everybody go?

See what I mean?

Just learned that our Milky Way galaxy and its evil arch-galaxy, Andromeda, are on course for a head-on collision... at 250,000 miles-per-hour! KABOOM!!! I alert my family and friends: WATCH OUT! DUCK! It's really going to be big! Hide in the closet... under the bed... right now! It could be the end of the world! It is inevitable!
It will happen in... oh, 4 billion years. Excuse me.

Do you know that, for the last few weeks, the top three best selling books everyone is reading are Fifty Shades of Gray, Fifty Shades Darker and Fifty Shades Freed?
Oh, sorry Sister Mary Margaret Joseph, I thought you loved to read.

Have you heard that a 12-by-23 foot garage on New York's Upper East Side is Manhattan's first million-dollar parking space?
Look, I know you only asked for a handout to feed your hungry family... I just thought you might find that amusingly interesting. 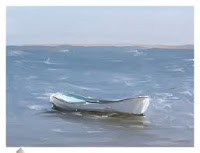 I just learned of  the two guys who were tossed overboard by a big Atlantic Ocean wave in 2008. They made it safely to the Nantucket shore but efforts to find their 26-foot fishing boat were unsuccessful. Thinking perhaps it sunk, they were surprised when it turned up... FOUR YEARS LATER, adrift off the coast of Spain with its motor, seat cushions and everything else still intact.
So have they found Amelia Earhart yet?

Now that we have our most sophisticated exploration vehicle ever, "Curiosity," on the surface of Mars, some creatively imaginative types on earth feel we should explore the very life-like images of "a half-feline, half-human face" and "a parrot" on the Martian surface. We will discover, they say, that not only was there life on Mars but it was a very creative life at that. Says one critic, " I know art when I see it." Really? Really!
No, I can't make out the man in the moon but I did see the cow! Honest. I just read of a new study that says attractive people do better, earn more money and develop greater skill than their less attractive counterparts, despite similar backgrounds. This, says one expert, correlates with what other research calls 'the accumulation of human capital'... the psychological jargon for success.
That's hard for you to believe, you say?

Did you know that a Loyola University research team recently found that people who eat organic food are, on the whole, more likely to be jerks?
No, I didn't realize that you are  a vegetarian... and would you mind moving your shopping cart off my toe?

Now do you see what I mean?
Sorry, didn't realize you were blind.