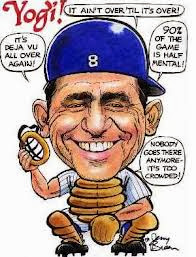 Yogi Berra said many funny things and most conveyed common sense logic, Yogi style. My favorite:  "It ain't over 'til it's over."

While this is the perfect time for new resolutions and a clean slate, let's recognize that the new year is just a fresh start that will be largely forgotten when Dec. 31st rolls around 12 months from now. What really carries meaning in life is not how we start but how we end, do-overs and all.

Soccer surely has the best ending, because the end isn't really the end at all, thanks to the stoppage time added on after 90 minutes of regulation. And who wouldn't want that at the end of life, a fourth official at your bedside, holding an electronic signboard with a lit 7, indicating seven years tacked-on to compensate for all the time wasting you did in the previous 90?

So, let's celebrate the heck out of life... our blessing. Let's toast the future and do more this new year that is memorable... like a resolution kept, a kindness shown, a friend made, laughter shared, a burden lightened. The past is done. We've already lived that and we have those memories. But it is the future... the coming year after year where we will spend all the rest of our time. It is waiting to be lived. Let's do it better than ever! We deserve no less.

So in celebration of the past that is already fixed in our history, we sing Auld Lang Syne* written in 1788 by Scottish Poet Robert Burns:

May you all enjoy a blessed New Year!
Posted by Jerry C at 12:45 PM No comments:

First, out with the old:

Worse Christmas movie EVER: Christmas Twister, the story of a rogue tornado in the Ft. Worth area... a (believe it or not) category 6 with sustained winds above 240 mph. Yes, it's a bad one and only one government meteorologist, his assistant and a naive female intern know that conditions are perfect for the most devastating storm EVER!

Trouble is, his wife (who he loves dearly but they are having problems) works at the local TV station with a very vain weatherman who says that twister info is hogwash since it doesn't show on his outdated weather screen. Even the meteorologist's wife doesn't believe him since he tried the same thing in Chicago and was wrong... and disgraced!

So as these smaller tornadoes keep cropping up out of a clear blue sky, surprising everyone, nobody pays much attention. There are no police or ambulance sirens, not much of anything except cars blown over, trees snapped, homes ripped to shreds, people thrown about... but all OK, thank God!

Hero's daughter skips school and goes to the mall. Kid brother covers for her. Guess where the killer twister will hit?

Rush to the climax, TV weatherman decides to cover this silly little storm and as he is on-camera making fun to his viewers, in the background, the most powerful twister EVER heads right toward him. The camera man, spotting it, tries to run but, alas, a railroad car carried airborne by the twister cuts them both down. I hope that TV weatherman has learned his lesson.

The mall, and its 15 or so people (producer probably couldn't afford many extras), screaming and running around waving their hands in the air, rush, single file, into a mall shelter, led by the meteorologist's brave school-skipping daughter. What acting!

In the end, the meteorologist is a hero, school skipping girl is a hero as she pulls a trapped victim--just in time-- from underneath a sign held up by a fraying rope that is breaking, one strand at a time. Phew! Meteorologist's young son is a hero as he helps someone out of the mall,  announcer wife is a hero as she saves another life, meteorologist himself is a double hero for calming a screaming, panic-stricken young woman... and the mall is a total wreck... sort of. Well, merchandise IS scattered on the floor inside, but otherwise, no broken glass or major damage... just stuff all over the mall floor. A category 6 can't harm a mall at Christmas time. It would be unethical.

There is one EMT in the film... he appears three or four times in different scenes and different uniforms, bandaging and saving lives. What a guy.

Finally, all the mall shoppers, dazed and walking funny, emerge into the sunlight, single file, spaced about 6 feet apart. Three or four actually slump on the curb and against the building. All clothes are torn and everyone has smudges on their faces and cuts and broken arms and stuff.

The reason it is called Christmas Twister is because we see some Christmas lawn ornaments in two of the scenes. Warning: Watch out for Easter Twister, Fourth of July Twister, Arbor Day Twister, etc.

The Academy Awards people are fickle... often passing over an obvious contender, so don't be surprised. But my recommendation: See it! It's the funniest movie not starring Will Ferrel now playing. Download it at Tango if you dare!
Posted by Jerry C at 4:04 PM No comments:

Yes Virginia, there are many Santas


Christmas traditions representing the joy of the season often touch our hearts. In the spirit of Santa Claus, enjoy this editorial, first published in The New York Sun in 1897. It was written by Francis P. Church in response to a letter sent to his newspaper by 8-year-old Virginia O’Hanlon.


As I learned years and years ago, when you repeat Santa Claus six times real fast, it takes you back to the originator of this kind figurehead and the spirit of the season. May yours be filled with peace, love and kindness... and cause us all to remember the true reason for this blessed holiday.

I am 8 years old. Some of my little friends say there is no Santa Claus. Papa says, “If you see it in The Sun, it’s so.” Please tell me the truth, is there a Santa Claus?


Virginia, your little friends are wrong. They have been affected by the skepticism of a skeptical age. They do not believe except they see. They think that nothing can be which is not comprehensible by their little minds. All minds, Virginia, whether they be men’s or children’s, are little. In this great universe of ours, man is a mere insect, an ant, in his intellect as compared with the boundless world about him, as measured by the intelligence capable of grasping the whole of truth and knowledge.

Yes, Virginia, there is a Santa Claus. He exists as certainly as love and generosity and devotion exist, and you know that they abound and give to your life its highest beauty and joy. Alas! how dreary would be the world if there were no Santa Claus! It would be as dreary as if there were no Virginias. There would be no childlike faith then, no poetry, no romance to make tolerable this existence. We should have no enjoyment, except in sense and sight. The eternal light with which childhood fills the world would be extinguished.

Not believe in Santa Claus! You might as well not believe in fairies. You might get your papa to hire men to watch in all the chimneys on Christmas Eve to catch Santa Claus, but even if you did not see Santa Claus coming down, what would that prove? Nobody sees Santa Claus, but that is no sign that there is no Santa Claus. The most real things in the world are those that neither children nor men can see. Did you ever see fairies dancing on the lawn? Of course not, but that’s no proof that they are not there. Nobody can conceive or imagine all the wonders there are unseen and unseeable in the world.

You tear apart the baby’s rattle and see what makes the noise inside, but there is a veil covering the unseen world which not the strongest man, nor even the united strength of all the strongest men that ever lived could tear apart. Only faith, poetry, love, romance, can push aside that curtain and view and picture the supernal beauty and glory beyond. Is it all real? Ah, Virginia, in all this world there is nothing else real and abiding.

No Santa Claus! Thank God! He lives and lives forever. A thousand years from now, Virginia, nay 10 times 10,000 years from now, he will continue to make glad the heart of childhood.

Merry Christmas all! May your new year be blessed.
Posted by Jerry C at 2:30 PM No comments: