Things that amaze me most: Part VI

As I told you before, there are a number of things/events/emotions that absolutely blow-my-mind because they are so introspectively amazing and give me a deeper sense of awe. So I made a list of the things that amaze me most... some big, some small, some acts, some things... but all, in my mind, amazing.  So far: 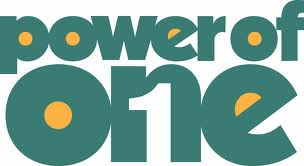 An old but good story: Two men were walking on the beach, naturally littered with washed-on-the-shore starfish. Every few steps, one of the men would stop, pick up a starfish and throw it back into the sea. After this had happened about half-dozen times, the other man chided him.

"Why are you doing that? There are thousands of starfish on the beach. You can't really make a difference."

First man flipped the starfish he was holding back into the ocean. "I can to that one."
Interesting thing about The Power of 1... it can be so subtle that you don't even know when or how you affect someone. It often manifests itself without your knowledge or conscious effort... like being a good example, or smiling to a passer-by who needs a smile. It can be overwhelmingly incredible like grabbing hold of a stranger's elbow as he is about to step off the curb into an approaching car. It makes a difference...often an amazing difference.
"1" doesn't have to be heroic in the Superhero sense, though it sometimes is. Take CNN's Heroes of the year for 2010:
(There is much more detail... and more heroes, on the CNN website.)
Remember Violet and Allen Large of Nova Scotia? Nope! The names sometime escape us... but that's the thing about the Power Of 1... heroic actions are usually not notable for who, but what and how. Being a hero is often a selfless, quiet action that positively affects others. Though Violet is currently fighting cancer,  the Larges, who won $11 million in a lottery last July, donated the entire amount for various causes including their local fire department, hospitals and organizations that fight cancer, Alzheimer's and diabetes. Said Allen, "The money that we won was nothing. We have each other."
Hollywood has a neat way of showcasing the Power Of 1. Movies (and television, books, etc.) can show the perspective of all the characters and showcase cause and effect actions. How about a seasonal example: It's a Wonderful Life showed the greatness of George Bailey in the way he lived his life of personal character without ever realizing the positive effect he had on those he touched. (I love that movie.)
An organ donor covered on tonight's news saved a dozen strangers by his donations... and it showed the donor's wife listening to her deceased husband's heart beating in another's chest. Very powerful. (You an organ donor? You should be.)

And this season, how about Santa? Oh yeah! the Power of 1... in hearts and minds.


Most of us celebrate Christmas because of one man born about 2000 years ago. Need a better example of the Power of 1?
May your holidays be blessed and the New Year bring a resolve to unleash your Power of 1 for a richer you. Play it forward.
Posted by Jerry C at 7:54 PM No comments: Links to this post

Email ThisBlogThis!Share to TwitterShare to FacebookShare to Pinterest
Labels: power of one, things that amaze me

You Can Fool Some of the People... 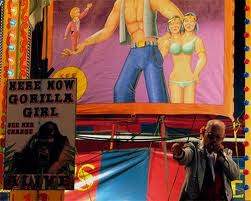 “No lady. We don’t got no elephants.”
Geez…  the rubes always ask about elephants. Usually it’s some pig-faced farmer-woman with a mouthful of popcorn.  “Uh, mmm. Pardon me sir… Do you have elephants?”
We ain’t no zoo, fer Christ’s sake. Carnivals don’t got elephants… or nothing that ain’t somebody’s pet…. Like Walter’s rat, Hermie. Or Maggie ‘s Ruff.  I got my little boa, Slither. ..and old Prince. Just pets. No elephants, trained seals or zebras. That’d be all I’d need… crap the size of footballs."
It wasn’t Frank’s Carney… but it was his Freak Show and he was the big draw on the Midway. Who would have doubted after they had seen Jack and Jill, the only fraternal Siamese twins in the world, joined at the hip by what looked like a rubbery band, Little Lulu, the world’s smallest lady and her husband, Big Bill Benson who actually weighed 470 pounds. Now there’s an elephant for you. Of course, Prince the Unicorn wasn’t too shabby… when his horn didn’t come unglued on those blistering summer days and lay across his face looking more like the paper towel cone it originally was.
Credibility started to suffer with Zelda, the bearded lady. She looked like a pro football linebacker in drag. Actually, she never played football… but she was in drag.  “Just never got around to that sex change did you Phil?”
And Tommy, the world’s biggest tortoise, was loosing his ‘gee-whiz’ appeal with the crowd. “Kids today just don’t buy into a 35-pound snapping turtle like their parents in the days before Animal Planet. Damn TV is going to drive us all out of business.”
Frank was always on the lookout for a new star. And when he sold the cold and rainy night’s first--and maybe only--ticket to that huge creepy-looking guy in the dirty long raincoat, he had a feeling that maybe this could be ‘it.’ The guy, with a sad excuse for a face that maybe even a mother couldn’t love, was either a real ‘freak’ or some perverted flasher. In either case, he wouldn’t be a first.
As Frank followed at a distance, he saw the guy’s eyes seem to bulge as he stared at Jack and Jill. Then the creep started to drool as he reached toward them across the railing.
“Hey Mister,” Frank hollered. “Hands to yourself! This is a ‘no-touch’ zone.”
With that, the creep turned, looked Frank up and down, and flashed him a hideous grin. As he ‘waddled,’ toward him, Frank noticed the guy’s feet were nothing but blobs of flesh… and where he walked, he left a glistening, slimy trace.
“What the…”
Then Frank smiled. He had found his freak… a real one this time.
Moments later, hearing what sounded like a muffled scream, Jack and Jill got off their chair and looked toward where Frank’s voice had came from. Frank was nowhere in sight. All they saw was ‘the creep,” grinning and slowly moving their way.
Posted by Jerry C at 10:50 AM No comments: Links to this post