Cartooonist Rube Goldberg simplified one of life's absolute truths showing what our world is really like... but did we pay any attention? NOOOO!

Rube Goldberg, born July 4. 1883, was a Pulitzer Prize winning cartoonist in the golden age of newspaper cartoons. He was best known for his "Rube Goldberg Machines" like the one below, and at the peak of his career, he was the highest paid of his day. He was smart and capable in other areas but his cartoon depictions showing how to accomplish simple things in a most complex way had his readers paying close attention, as will you as you follow his directions below:

Today's world of problem-solving is not much different from Goldberg's time, or for that matter, time from the beginning of time. After Adam and Eve ate the fruit that upset the apple cart, seems we have been destined to do things the hard way.

After The Garden of Eden, humankind has followed that mode. The saying "Keep it simple, stupid" didn't 'come out of left field.' So it is understandable that today's problems are nuanced to be more complex to resolve. Over time, we have complex conundrums that seem unravelable.

We are fascinated watching dominos fall but the least little flaw dramatically changes the end result. So In reflection, I'm thinking life is one big Rube Goldberg Machine built to a complexity that the strength of the chain is only as strong as its weakest link .

Yep. That sounds like us. We focus on the result instead of the cause and disagree on every step of the complex process. 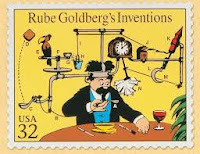 Rube Goldberg was so good at touching our mentality that we made a postage stamp honoring him. And  there is probably a postage stamp waiting for the person who shows us a way out of this mess. 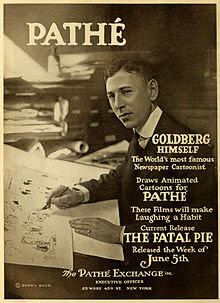 Side note: A few years back, my Seattle daughter and I saw a Rube Goldberg exhibit of many of his "complex machines "in that city's Museum of Pop Culture. Rube Goldberg was a fascinating individual

Posted by Jerry C at 2:43 PM No comments: Links to this post

WOMEN ARE NOT EQUAL TO MEN... They are superior and I have proof!


As the argument goes, they can birth babies. But that is just the beginning. We were created as equal... one could not sustain life without the other. But, societally, we don't live like that. All life-long, women have had to 'dance backward" in more ways than one.

Every woman in every society--except where Wonder Woman comes from--has had to fight this uphill battle to be seen (by men) as mans equal in intelligence and reasoning with the natural benefit of a complimentary perspective that completes the picture of everything real. And wow, do we need that.

Women are history's classic underdogs, and as sports, politics and things that are "99 percent certain" have shown time and again, NEVER UNDERESTIMATE AN UNDERDOG.

*Oh, the photo is of Geraldyn Cobb who recently died at 88, our first female astronaut in space... except for the fact that she was a woman denied passage through that glass ceiling of the time, despite after having all the credentials and testing in the top 2 percent of all who applied for the role. It was astronaut and senator John Glenn who 'shot her down' in congress in 1962:

"The men go off and fight the wars and fly the airplanes and come back and help design and build and test them... " he testified in the hearing that denied Cobb her place in space, "The fact that women are not in this field is a fact of our social order."

You presumably didn't know any better at the time, John, but you should have... as should we all. It was 21 years later when Sally Ride became the first American woman in space. Cobb's 2005 book, 'Right Stuff, Wrong Sex'" told about the dozen other highly qualified women pilots who passed the tests but were also barred from space at the time.

Geraldyn Cobb began flying at age 12  in her father's Waco aircraft and had logged more than 7000 hours as a pilot when she was asked to take a space stress test to qualify as an astronaut. Denied of her chance she went on to a flight career that earned her a Nobel Peace Prize for her distinguished role in the air... an award not shared by any American astronaut.

Her award was for her work flying humanitarian missions in the Amazon jungle flying alone across the Andes Mountains in her Aero Commander, delivering medicine, food and clothing to indigenous tribes and others in need. She was honored by the governments of Ecuador, Brazil, Columbia and Peru. She is, as you may guess, one of those drservedly in the National Aviation Hall of Fame.

She flew the world for a number of war years delivering B-17 bombers and the like wherever they were needed, despite being turned down by airlines who would not hire women as pilots at that time.

She also holds world flying records for speed, altitude and distance, but never made it to space. A few years back she was the subject of an off Broadway play, "They Promised Her the Moon."

There are a multitude of women of historical importance and more in big and little roles---that have shown what women can accomplish, despite "having to dance backwards." Geraldyn Cobb is just one of that immortal female crowd of "can do."

Her unfulfilled love of being a space pioneer never dulled her spirit for the adventure of it, and alone, in the Amazon on July 20, 1969, she danced on the wings of her plane in her moonlight celebration of "man"s" (another bias historically used incorrectly, intended to refer to all humanity says an etymologist--look it up--for the Oxford English Dictionary) first landing on the moon.

Women ARE superior to men because all of their lives, they have had to fight just to be seen for who they are... equal, no less, maybe more. And capable in ways yet to be seen.

"Gender equality is more than a goal in itself. It is a precondition for meeting the challenge of reducing poverty, promoting sustainable development and building good governance." Kofi Annan

Posted by Jerry C at 1:40 PM No comments: Links to this post

North Carolinians brag they have the best barbeque in the land. THEY DON'T!


While it is true that NC barbecue is good--and I know because I live there--I personally know where the barbecue king lives... and it ain't North Carolina.

And why should that be such a surprise? Seattle has so many great things going for it, logic almost dictates the world's greatest barbecue has to be made there.

Seattle is: (take deep breath here) America's most educated city with more than half of its 675,000 residents holding college degrees, its Columbia City zip code residents speak 59 different languages making it the most diverse in the nation, residents commute by bus (an incredible much used network of routes), bike--every bus has a bike rack on its front bumper, 24 hour ferry service, walking, running, Ubering, etc, recycles everything recyclable by garbage pick-ups twice a week at your curb and fines for those who don't recycle, has an architects dream main library with 26 branches catering to 80 percent of the residents who hold active library cards and can deliver books ordered by
computer and every other method to the closest pick-up locker or facility, has less rain, more mist it seems, than Chicago, Miami and three other cities, its average temperature, year-round is from the low 40s to the high 70s, is so green with foliage and rich with city-wide sculptures and art...

... And it is the home of the King of Barbecue! (Thank you Terry for the best in taste ever: pulled pork in bite-size chunks, brisket that has no equal, beans cooked with the drippings plus an infusion of the pulled pork, personally made white and red sauces--as if they were needed--and fresh Hawaiian roles. I suffered the cures of great food... getting full before it was all eaten.

Couldn't have been better.