I'm sure Somebody important was trying to tell me something. 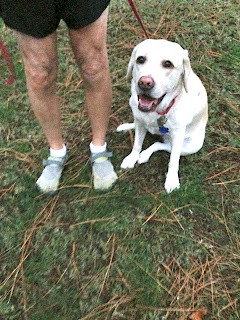 Abby, my beautiful yellow Labrador retriever and I were running early this morning. She can run me into the ground at a pace I don't know, but is a wonderful companion by my side. It was a damp, cold and very windy morning. Still dark, we saw nothing and nothing saw us. I had something a little bothersome on my mind. Four miles felt like a lot more.

Ever have one of those days when you wonder if anyone is listening to your thoughts?

We turned a familiar corner, past a vacant lot where wildflowers grow in nicer weather and Abby, who was born to hunt--and in her mind, vanquishes every squirrel she ever sees--stopped cold and sat, staring into the barely visible openness at the side of the road.

Then I saw what she saw. Not ten feet from us were two beautiful does, standing motionless in low grass, watching us. Now we do have deer around here... and we do see them often... mostly running across the road or far into the woods, white tails disappearing. And Abby wants those deer... she pulls so hard on her leash that if we are on a downhill, I really have to be careful. But not this time.

Receiving this reception when our oncoming sound should have sent them bounding... that was kind of special. We were still for about five seconds, neither deer nor us moving... just looking at each other. Then they turned and bounded off.

I really had the feeling that Someone was saying, "I heard you... and I am here!"

And if that's just me, I'm fine with that. Not a bad start at all for a great day.

Email ThisBlogThis!Share to TwitterShare to FacebookShare to Pinterest
Labels: Abby, deer, running, Someone

...from my cold, dead hands

Remember when airplane hijackings were 'the thing' and almost every other day, someone with a gun was ordering an airline pilot to fly to Cuba? We really didn't have a good plan to stop all that nonsense. This was the lead-up to all of today's security. Welcome TSA.

On one flight I was took during that era, the pilot actually addressed the passengers with this message: "If you ever see someone stand up with a gun on this plane, everyone--ALL OF YOU--throw whatever you have in your hands... books, purses, briefcases-- anything and everything-- at that person's head... as hard as you can. Then the five closest jump on him!"

And that's a true story.

A comedian of the time offered an alternative plan: "As you board the plane, everyone will be issued a loaded handgun. A hijacker would have to be crazy to try anything."

Flash to today and the era of Virginia Tech, Aurora, Newtown, etc. There have been 29--yes, 29 mass shootings since Columbine on April 20, 1999. At this rate, we'll be in triple digits before our kids grow up. We have certainly come a long way from hijackings.

In America, we have freedom of Speech, but it has limitations--you can't yell FIRE! in a crowded theater or cause harm or impinge on the rights of others.. a common sense thing.

Now I'm a Second Amendment proponent and in America there is a place for guns (its the culture, stupid)... but apparently without the common sense thing. Thanks NRA.

This isn't a message of how to fix it. This is about how to understand it.

The NRA proposes we arm teachers and/or security and eliminate gun-free school zones to make our children safer. The surest way to combat bad guys with guns is with good guys with guns, they say.

On the weekend of January 19th this year, in three separate gun shows around the country, there were five firearms casualties... minor casualties thank God, but three accidental gun discharges wounding five people.

You know, I've been to gun shows. Everyone there is some kind of a gun buff or gun knowledgeable at the least. According to the NRA then, gun shows should be the safest place around. But hey, accidents happen. That's why every gun show I ever knew bans loaded weapons on the premises. Why? For safety reasons. ('They' said it, not me.)

Many of our teachers (some with little and/or reluctant experience in firearms--but they took the course) may wind up packing loaded guns. Common sense would ask, how could that be safer? Accidents kill too! And cross fire. So what is the greater danger? Hopefully/naively, maybe none of our schools will ever have an incident, but many will 'be packin' around children, pre-teens and older students (some of which already have, carry and bring guns to school) all the time. Bad mix.

Yes, I agree. A gun in the right place could save a life. The NRA journal, The American Rifleman, used to (and may still) run a column called "The armed citizen," which told stories of people with guns defeating burglars, bad guys, etc. A good read. But it never told stories that had bad endings. Real life has bad endings. Think that would never happen? How old are you... 3?

Attention to mental health issues, background checks for all, better and surer enforcement of crimes with guns, common sense... yeah, I'm for all that. Large capacity magazines and guns that could easily be made fully automatic, I'm against that. But there are millions of those products already out there so we'll have to live with those, no matter what. Somehow, I don't feel safer.

In closing... Hey, look at us. We remain the rootinist, tootinist, gun totin' people on earth. Eat your heart out, rest of the world. Nobody takin' our rights away! We're Number One... by an incredible large margin. Doesn't anyone else 'get it' but us? 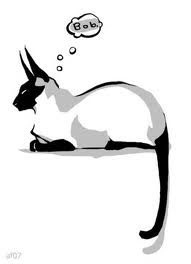 I love this poem. Tell me if this doesn't ring true:

In ancient Egypt
We cats were gods
We ruled the heavens
We reigned the earth
So kneel before me
I said come to me
Uh, listen to me
How about just a treat then?
Okay, maybe a toy
Some crumpled paper would do
I'm not picky
Well can you at least scratch behind my ear?
Can you at least do that?
Oh
Oh yes
You serve your master well

Cats is the second longest running show on Broadway. It opened in 1982 and ran for 7,485 performances before closing there on Sept. 10th, 2000. (In case you wonder, The Phantom of the Opera was first, Chicago third, Les Miserables fourth and The Lion King at number five.)  Cats continues elsewhere, probably forever.

It's lyrics and cat names came from T.S. Eliot's collections of whimsical poems, Old Possum's Book of Practical Cats about feline psychology and sociology that he wrote in 1939. Trevor Nunn added the contemporary update to the lyrics and story.

According to Eliot:
(If you want to hear Eliot himself read this poem, click here )

The Naming of Cats is a difficult matter,
It isn't just one of your holiday games;
You may think at first I'm as mad as a hatter
When I tell you, a cat must have THREE DIFFERENT NAMES.
First of all, there's the name that the family use daily,
Such as Peter, Augustus, Alonzo or James,
Such as Victor or Jonathan, George or Bill Bailey--
All of them sensible everyday names.
There are fancier names if you think they sound sweeter,
Some for the gentlemen, some for the dames:
Such as Plato, Admetus, Electra, Demeter--
But all of them sensible everyday names.
But I tell you, a cat needs a name that's particular,
A name that's peculiar, and more dignified,
Else how can he keep up his tail perpendicular,
Or spread out his whiskers, or cherish his pride?
Of names of this kind, I can give you a quorum,
Such as Munkustrap, Quaxo, or Coricopat,
Such as Bombalurina, or else Jellylorum-
Names that never belong to more than one cat.
But above and beyond there's still one name left over,
And that is the name that you never will guess;
The name that no human research can discover--
But THE CAT HIMSELF KNOWS, and will never confess.
When you notice a cat in profound meditation,
The reason, I tell you, is always the same:
His mind is engaged in a rapt contemplation
Of the thought, of the thought, of the thought of his name:
His ineffable effable
Effanineffable
Deep and inscrutable singular Name.

For your renewed enjoyment while you are humming Memories, here is the musical rundown. Enjoy: 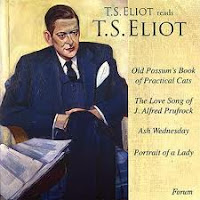 Confession: I'm a dog person... but one who has owned Hershel, the most poetically typical, lovable cat in a house with as many as five dogs at any time--and yes, Hershel held his own--so I am an incredible admirer.
Posted by Jerry C at 2:28 PM No comments:

Do you know the most asked question in 1953?

How much is that doggie in the window... the one with the waggly tail?

Yep, it's true. And the singer who made it so was Patti Page, a popular vocalist in the '50's and '60's with a sweet voice and personality to match. She died at age 87 on New Year's Day. But if you know her by song, you may also remember the Tennessee Waltz (I was waltzing with my darling to the Tennessee Waltz) another huge favorite at the time and lots of others.

So sing along with me:

I read in the papers there are robbers (roof, roof)
With flashlights that shine in the dark
My love needs a doggie to protect him
And scare them away with one bark

THE GLASS HALF FULL: Charging into '13 with a puppy or baby kitten... how cute would that be? 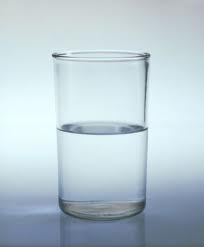