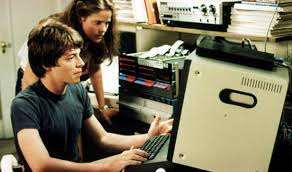 Remember this movie?  Well, of course you won't if you are a millennial. But otherwise, you'll smile at the recall. War Games was a box office success and nominated for three Academy Awards in 1983. Today, it would almost be considered a spoof because technology has so outstripped its premise.

Imagine, a computer terminal that looks like this and a government security password to WOPR (War Operations Planned Response), the world's most sophisticated computer that is responsible for our nuclear arsenal, as simple as the name of the developer's daughter, Raven?

Anyhow, this is the movie's synopsis:

High school student David Lightman (Matthew Broderick) unwittingly hacks into a military supercomputer while searching for new video games. After starting a game of Global Thermonuclear War, Lightman leads the supercomputer to activate the nation's nuclear arsenal in response to his simulated threat as the Soviet Union. Once the clueless hacker comes to his senses, Lightman, with help from his girlfriend (Ally Sheedy), must find a way to alert the authorities to stop the onset of World War III.

Hey, it's a fun movie, even if outdated. Here's the trailer for you nostalgia buffs.

But War Games is a good jumping off spot to highlight how computers, robots and algorithms have taken so much humanism away from us, or as the headline of the The Perfect Bet book review says, "Humanity Hasn't Got a Chance." Artificial Intelligence is winning.

In his book, Adam Kucharski talks about how science and math are taking human skill and luck out of gambling... and so much more. If a computer can spot in milliseconds a large Wall Street trade in process and shave or add even one penny to the price making someone quite a bit richer, then what chance does a mere human have. This didn't just happen, As early as the late 1970s, an ancient computer even had the game of roulette figured out... and the incredible technological evolution just kept rolling along.

"Statisticians are getting good at predicting sports scores and intelligent algorithms can beat human poker players," the author says. The machines have even even learned when and how to bluff. "Even lottery games have been picked off by brute force attacks buying up large combinations of numbers. Checkers and chess have long ago fallen to computers."

And so has Jeopardy. Remember IBM's Watson? The computer certainly came up with all of the factual answers in thousandths of a second then reacted to the buzzer before any of the human contestants even processed the question, let alone hit their buzzers.

"Smart machines might eventually get too smart, creating a future where "humans are unable to participate in real time, and instead, an ultra-fast ecology of robots rise up to take control."

"The line between luck and skill--and between gambling and investing--is rarely as clear as we think," Kucharski adds. "Now that the bots are combining mathematics, physics and psychology, let the games begin. Or should I say--with perfect bets and winning strategies played by superfast computer--the games are over." 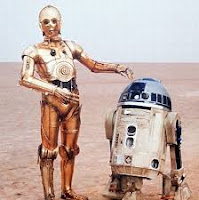 A rabbi, an Arab, a robot, and a Catholic priest walk into a bar. Only the robot exits.

A robot walks into a pharmacy. The pharmacist asks him if he’d like anything. The robot replies, “A soul.”

How do you stop a robot from destroying you and the rest of civilization? You don’t.

“Waiter! Waiter! What’s this robot doing in my soup?” “It looks like he’s performing human tasks twice as well, because he knows no fear or pain.”

Laugh and the world laughs with you...

... or thinks you are some kind of a weirdo.

These gems are actual headlines from newspapers around the country and they were written in all seriousness... but they just came out wrong. (Then more about the weird headlines I used to write.


Now comes the fun part... about me and my goofy "on purpose" headlines:

My dream job in high school was to write sports stories for the local newspaper. The miracle happened when a friend told me that the newspaper was looking for someone who could write to help the sports department on Friday and Saturday evenings. Seems that's when all the high school teams played and the sports desk didn't have near enough people to cover those events.

So I applied and GOT THE JOB.

It was absolutely above my fondest expectations. When most of the newspaper office staff and the big brass go home at night, a skeleton staff covers the sports news when it happens. And working for a pretty good size newspaper market (when there was such a thing as newspapers) meant those goofs they were funny and crazy) had the place almost all to themselves.

We had office chair races, lit hot foots (hot feet?) on unsuspecting fellow staffers and taunted the obituary editor--the only woman working the late shift who had to be there for those who died after hours--when she had to go to the bathroom. Seltzer bottles and practical jokes were always a moment's notice away. Trade secret: sports writers of that day were just big kids who never grew up.

We answered phones from readers who were looking for prep scores or had sports questions for the experts.

Anyone could be an expert. My first day on the job, I had to answer the multi-line black desk phone. As many lights were blinking, I had to ask a sports desk regular, "How do I answer this?"

He looked at me and said slowly and calmly, "Pick up the receiver, take a deep breath and say 'Hello.' "

I felt indoctrinated and soon began my own free expression advice. I learned that if you didn't know the right answer, neither did the caller, so you made something up. "Who holds the record for the fastest pitch?" (Actually, it was Bob Feller at 96 mph at that time.)

"Gee, thanks" an inebriated voice on the other end of the line said. "I owe ya one."

I loved that part-time job-- held it for three years. It soon included covering  most of the high school sports, motorcycle races, the Harlem Globetrotter and whatever. I learned that as a reporter, I was also the 'de facto' official scorer, responsible for getting the line-ups and creating the box score for the game then writing the story that appeared in the next day's paper... with my by-line!

I soon learned there was more to do that just getting the player's last name. At my first game, I forgot to get any player's first name... so when I wrote the story hours later, I made all the first names up.

Yeah, I heard about it from my boss. He read me out and I thought I'd be fired. Then he said "Waldo Schmidt? That's a good one. Don't do this again, ok?"

We also wrote the headlines and those were always the most fun. "Beauty Queen Unveils Bust at Dedication Ceremony" If time permitted, we made writing headlines a group project to see who could come up with the goofiest headline. "Reagan To Have Tissue Removed From Nose" Yep, we did that. Clever headlines that might have a double meaning scored extra points for the creator. "Robber Holds Up Albert's Hosiery"

But you know, that use to happen sometimes by accident as reporters rushed to beat the newspaper deadline. "Man walks down the street and turns into a bar." Sadly though, those times have passed. Seems today's world is too serious to have fun for fun's sake. "Legislator Wants Tougher Death Penalty" See what I mean?

Now that you are warmed up, I'll try my favorite writer's joke on you:

A screenwriter comes home to his burned down house. His sobbing and slightly-singed wife is standing outside.  "My God. What happened, honey?" he asks.

"Oh Jerry, it was terrible," she weeps. "I was cooking. The phone rang. It was your agent.  Because I was on the phone, I didn't notice the stove was on fire. The house went up in a second. Everything is gone! I nearly didn't make it out of the house. Poor Fluffy is..."

Laugh and the world laughs with you...
Posted by Jerry C at 12:30 PM No comments: