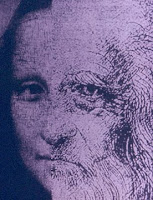 ... or is it a smirk? Was Leonardo pulling a fast one on us when he painted the Mona Lisa in his Florence studio 500 years ago. Maybe, as many now think, he was pulling one of the longest-lasting practical jokes of all time... or, he was trying to tell us something?

The actual painting is rather small, just 20 7/8" x 30... oil on wood. All the hoopla over this famous lady could cause you to imagine it larger. And Mona has no eyebrows... but that was not uncommon for a lady in the early 1500s. But Really though, who was she... and what was wry her smile all about? One theory has it that Mona Lisa was a portrait of a banker's wife who bore a more formal version of the name. I'm guessing that is a historical red herring.

Because Leonardo carried the painting with him for life (along with two other self-portraits) gave thought that it is actually another self-portrait of himself in drag, so to speak. While history does not show him to be a cross-dresser, he was believed to be gay. A close inspection of this portrait compared to his other self-portraits shows an astounding 97% match in minute ways. And side-by-side, it really looks close. See for yourself.

Well that, I suppose, could explain the wry smile. OK Leonardo, you are not only a brilliant painter but a genius on many levels... I suppose you've earned the last laugh, you cutie.

(Go to MonaLisamania.com for more Leonardo fun.)
Posted by Jerry C at 11:22 AM