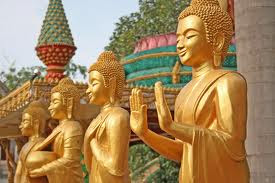 In Greek mythology, was it King Midas who said, "He who has the gold, rules?"

King Midas was a very kind man who ruled his kingdom fairly, but he was not one to think very deeply about what he said. One day, while walking in his garden, he saw an elderly satyr asleep in the flowers. Taking pity on the old fellow, King Midas let him go without punishment. When the god Dionysus heard about it, he rewarded King Midas by granting him one wish. The king thought for only a second and then said I wish for everything I touch to turn to gold." And so it was.
King Midas' gift gave him "The golden touch," and, as you can see, it turned out to be a curse.

The beautiful flowers in his garden turned toward the sun for light, but when Midas approached and touched them, they stood rigid and gold. The king grew hungry and thin, for each time he tried to eat, he found that his meal had turned to gold. His lovely daughter, at his loving touch, turned hard and fast to gold. His water, his bed, his clothes, his friends, and eventually the whole palace was gold.

While he was the wealthiest man on earth, he was also the loneliest and saddest, not to mention hungriest.


King Midas saw that soon his whole kingdom would turn to gold unless he did something right away. He asked Dionysus to turn everything back to the way it had been and take back his golden touch. Because the king was ashamed and very sad, Dionysus took pity on him and granted his request. Instantly, King Midas was poorer that he had been, but richer, he felt, in the things that really count.

Nope. He didn't say that. He did however, give us "the Midas touch." The moral of the story: Be "richer in all the things that really count."

It all comes down to living "rich"... metaphorically... kind of like The Golden Rule, which I have used in one blog form or another four times before now.  (Go to 'Search Blog' and type in golden rules--they make wonderful pegs to some stories.)


Then there are the Anti-Golden Rules: "He who has the gold, rules" -- "Don't get mad, get even" -- "Revenge is the best medicine," -- "An enemy of my enemy is my friend."  Jimmy Hoffa once told friends, "I do unto others what they do unto me... only worse." Charles Dickens' sleazeball character, Martin Chuzzlewit said, "Do other men for they would do you."

Sadly, we all know a few people like that. Anti-Golden Rules are tough... I see those people as angry... revengeful... brooding... people always at war with their fellow man. No "Happy-go-lucky" here. Advice: Do not try to tell these people a joke.

Golden Rules are simpler expressions of hope... and practicality. There are many formal expressions in mottoes, by scholars and humanists, in religious tenants, etc., but the Golden Rule is not religious. It is a moral, non secular expression of faith in humanity. It can be so simple:  Google's credo is "Do no evil." In a new book, SEND: Why People Email So Badly and How to Do It Better. Authors David Shipley and Will Schwalbe say "Send e-mail you would like to receive." Louie Armstrong says "If you don't treat me right, shame on you." Remember: "Pick not thy nose lest someone else picketh it for you." (I just made that one up.)

Sir Isaac Newton (the one boinked by an apple) said in his book, Principia, "The golden rule is founded on the same law of Action and Reaction"... as are many of the principles of our world.