It's a wierd, wierd world out there... 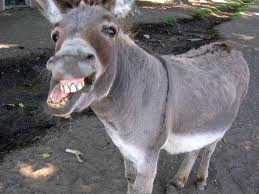 But miracles do happen: Take for instance, the man from Zimbabwe who was charged with having sex with a donkey. He told the court that, yes, he did pay a woman $20 for sex... and she miraculously 'shape-shifted' (read transformed) herself from a female to a donkey and tied herself to a tree.

"Your worship," he told the judge, "I only came to know that I was being intimate with a donkey when I got arrested."

Chalk up one miracle for the woman/donkey. Only three more required to meet one requisite for sainthood in the Catholic Church. But the road to sainthood is paved with difficulties. According to Father Guido Sarducci (of old SNL fame), beatification is slanted to favor Italians. "For Italians," he said, "they count card tricks."

British research (those Brits think of everything) has found that cows increase milk production if exposed to a little Shakespeare. After a theater troupe performed scenes from The Merry Wives of Windsor while rehearsing in a barn before a seemingly non-caring dairy herd, the herd's milk production increased 4 percent. (True) When several of the performers expressed disgruntlement at the lackluster audience who responded with nary a moo, let alone a standing 'O', the director angrily demanded they shape up or get out. "What," said the actor playing Falstaff, "and leave show biz?"


In America, we have the right to sue anyone for anything. Conversely, we have the right to remain silent... but we mostly don't...so the admittedly drunk lady who fell through the window of a hair salon in a sidewalk fight with her husband, is suing the hair salon. She contends the salon should have used safety glass because that sidewalk is "frequently traveled by intoxicated pedestrians." Good point since an Australian city has already installed rubberized sidewalks just in case an inebriated pedestrian falls. (True.)


Elsewhere in England, a 92-year-old great-grandmother was refused service in a liquor store because she couldn't produce a photo I.D. Serves her right, the little minx.
Posted by Jerry C at 7:58 PM