It may be hard for some to believe, but starting in 1947, one of the best things ever, if you were a kid was The Howdy Doody Show on television. Wow! When Buffalo Bob Smith asked, "Kids... What time is it?" every kid in the Peanut Gallery hollered: "IT'S HOWDY DOODY TIME!" Funny how a puppet show could captivate an audience. We are much more sophisticated today  ; - ) with The Simpsons, Family Guy, The Muppets, etc. but even in its earliest days, television just knew what we liked. 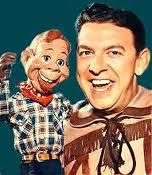 Television was in its infancy and most of America didn't even have a TV set yet. We watched at grandma's house... got our programs from Chicago via a huge, ugly antenna on her roof. When reception was good (i.e. you could make out what was happening through all the 'snow' on the screen) and a call went out to the neighborhood: "Come quick. Television is coming in tonight."

All television was seen in black and white... and there were only three networks--no ESPN, MTV, HBO or anything else... and television went off the air at midnight or 1 a.m., replaced with a "test pattern" Programming was all 'live,' which meant we saw everything as it happened... slips, flubs and all... and we watched anything and everything.

The first coaxial cable, which enabled television to be broadcast all over America at the same time, happened just 60 years ago. And it absolutely blew everyone's mind to think that a person could actually see the Atlantic and Pacific Oceans at the very same moment--live!... from anywhere there was a TV set.

Yep. That was technology then. And to place it in time, these were some of the prices:

I Love Lucy was the first sitcom... you've seen reruns... and it was truly good.  Edward R. Murrow had one of the first news shows like the network news of today. Dave Garroway was the first 'Matt Lauer' of the Today Show, all the way back in 1952. His co-host for a time was a monkey--really! The Milton Berle show and The Ed Sullivan Show were the precursors of the variety and entertainment shows of today... and The Sid Caesar Show with Imogene Coca was Saturday Night Live before there was an SNL. If you think I'm kidding, take a look on YouTube.  Everything old is new again. Funny how that works, but does.

Alvin Tolfer, in his 1970 book, Future Shock, said there was so much change in such a short period of time, that if all of man's technological and scientific growth on earth were represented by a two-lane highway, from the first man to 1940 would be from one edge of the road to the middle line. Then 1940 to 1970 would be the other lane of the highway. And that was then! He also said, "The illiterate of the 21st century will not be those who cannot read and write, but those who cannot learn, unlearn, and relearn."

One of the few constants is television programming. Technology has changed--sophistication in production, color and timeliness represents maturity--but we are still the same, simple-minded viewers of programming of the same genre... with hundreds of networks to burn our minds. Will we ever learn?