"I vant to be alone." Fat chance Greta!

"I vant to be alone" (so she had a sexy accent) was the famous quote many old-time movie buffs remember her by. Greta Garbo (1905-1990), was a reclusive Swedish born movie star and pin-up queen at a time when America fell in love with 'the cinema.' Her sensual, mysterious look made her a hit, both in silent and sound films before World War II.

Maybe it was easier then, but wanting to be alone just won't cut it today. Just ask Lindsay Lohan, Kate Middleton, J-Lo... or anyone in India... the world is a crowded place... and growing more-so at a rapidly increasing pace.

Perhaps Russia, with all its enormous land mass, would be a better option. I DON'T THINK SO. Motorists recently had to sit out a week-long, 125-mile-long traffic jam (take that, Los Angeles)... and the weather could be better.

Wyoming? Maybe, but once you've seen all the splendors in nature, what next?

Perhaps one of the Voyager probes nearing outer space could have been an option. Launched in 1973 and traveling at a mere 35,000 miles-per-hour, these two space craft have put more than 11 billion miles between us and them. It takes 17 hours for anything they transmit to reach us. They are so far 'out there' that even Matt Lauer couldn't play "Where in the world... " because they aren't even in our solar system any more....

And their voyage is just beginning. 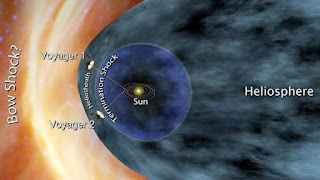 Now the real kicker: when 'the (hypothetical) kids whine, "Are we there yet? I have to go to the bathroom," the nearest star (not counting our sun) is Alpha Centauri, just 4 1/2 light years further.