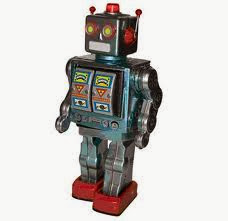 But. if you can't beat 'em, you could join 'em... IF you have an extra $400,000. Then you could buy a robot that scoops poop (true)... but that's not all it does. It also makes breakfast and cookies... presumably after it has washed those tiny robot hands... I hope!

Then there is something quite different... the Robotic butt (also true), no relation to Robot Poop Scooper though they must have a lot in common. Medical schools have different ways of teaching vital medical techniques such as administering a prostate exam. So instead of doing something disgustedly uncomfortable to volunteers, schools have a butt for that... or, a robutt (my most clever word). It is a realistic looking/feeling male mid-section torso bending over an examining table... and on the TV screen the doctor-to-be faces, a real image of the rest of a man so the student gets the full picture (oh joy!)... and a most realistic feeling for the task. The robutt does give feedback according to the sensors inside it. I wonder if one of the reports is "OW!" (Picture available butt... not for here. It's pretty realistic though.)

Then there is the Rubic's cube robot solver... in seconds... every time.

And the robot dart thrower that always wins the beer... and subsequently rusts to death.

There is also a robot stand-up comedian. Honest. "Did you know atoms have mass? I didn't even know they were Catholic."  Not bad... for a robot. And they say Andy Kaufman is dead.

My favorite though is the robot that plays rock-paper-scissors. It wins 100 percent of the time... and here's its secret: It cheats. It processes your throw in 1/000 or a second and counters it perfectly... every time. 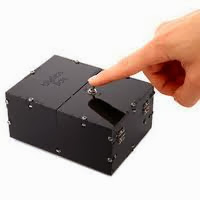 Oh yeah, I almost forgot this one... you switch this robot on... it opens, a mechanical finger comes out... and it turns itself off.
Now that's efficient function. Nice.

Email ThisBlogThis!Share to TwitterShare to FacebookShare to Pinterest
Labels: Robots