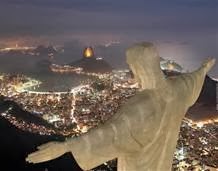 Names can be quite quirky. Where you come from is big.

Take 12-year-old soccer prodigy
Petroswickonicovic Wandeckerkof da Silva Santos, for example. His friends simply (simply?) know him as Petroswickonicovic. But, if he continues to excel in his sport, his fans may know him differently in future years... like Edson Arante do Nascimento... Pele to the world.

What's in a name then? Ask that question in Brazil and stand back.

Brazil is a most colorful country and the names of many "reflect centuries of immigration, conquest and slavery... to produce a fusion of identities," says the NYTimes." In a country with an array of musical traditions, from the melodious bossa nova to sertanejo country music, naming experts also mention the symphonious way some unusual names resonate when they are coined by expecting parents. Brazil... ranks among nations where naming has evolved into something resembling a competitive sport."

"Never think he or she was making a joke about his or her name," advises Mexican novelist Juan Pablo Villalobos. "No matter what name they told you, it's the actual name.

A Sao Paulo TV station recently found a family with seven children: Elvis, Elvisnei, Elvismara, Elvislei, Elvicentina, Elvisfaine and Elvislene. And if you are All Shook Up after hearing those names, That's All Right," said dad in this made-up quote.  "Don't Be Cruel because these kids are Always on My Mind."

Having had the best excuse in the world to visit and travel in Brazil a handful of years back--our kids lived there and their first child/our grandchild Rio (talk about a coincidence) was conceived there--the country remains alive in my mind for so many reasons.

Race, color and culture mark South America's largest, and only Portuguese speaking country as remarkable. This should produce a quite a feast for the eyes of the rest of the world as Rio de Janeiro hosts the 2014 World Cup AND the 2016 Summer Olympics.