If you think it isn't nuts out there, read on:


Is this boat half sunk or half afloat?

Needing someone of note to speak on emergency procedures for a criminology seminar, it chose Francesco Schettino. You may remember him as the Captain the Costa Concordia when it ran aground in 2012 costing 32 people their lives.

The Captain, logically, was a great choice considering he was in the first lifeboat.  Can't do much better than that.

Official note: On the lifeboat, he was told to "Get back on board, damn-it!" by his supervisors, ruining his day for sure. Legal proceedings against him are ongoing. Whatever happened to the old "Captain must go down with his ship" thing? New shoes Captain? 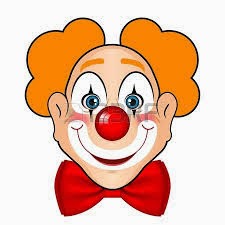 Are you Lonely and like to laugh? Check out clowndating.com. It says "Clowns are often feared and hated, which makes finding the right person a real challenge. It's no fun looking for love when you're a clown. Behind all the makeup and red nose is a lonely heart."

Picture that romantic first date: Barnaby Buckles knocks on your door and presents you with your very own red nose, then holds open the door of his mini-clown car and you, in your 'first date best' climb in the front seat. You hear him walk to the driver's side (Clomp, clomp, clomp-- size 38 shoes, you know) as few dozen of his buddies pop up from the back seat, introduce themselves... then squirt you with seltzer. You wonder, "Will the fun never stop?" Answer: "Never!" as you ride into the most delightful future you could imagine.

As the website says, "Everyone loves a clown... let a clown love you. You don't have to be named Coco to join." Really. (Sorry clowns. I know you are serious... but always funny.)

Want to get in on the newest trend? Who doesn't. Well, a natural leader stripped naked in New York's Times Square a few days back in his campaign for the "Right to be Nude in Public." He says nudity is a form of expression and he, unselfishly, wants that freedom for everyone. Seems he is fighting your fight, not unlike the NRA, wanting everyone to have all the guns they want, anywhere they want them, all the time.

He could form the new NRA (Naked Rights for All) or join forces with the old NRA and become the strongest gun/fun lobby in Washington. On second thought, joining forces wouldn't work. Where would you carry your pistol? If this catches on, as I'm sure it will, it could put Speedo out of business.

It is said, after a while, humans start to look like their dogs. I know we do. Well, rest easy dog lovers, there's a new app that employs facial recognitio to match dogs with their owners. So if your dog is ever lost, you post a picture of yourself and anyone who sees a dog looking like you will return it immediately. "Hey look. That dog... the one that's smelling the other dog, looks exactly like that guy in the app."

Oh, I see... you don't post YOUR picture, you post your dog's picture. Well, excuuuse me! Actually, it could work either way. 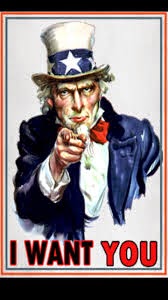 No he doesn't... Uncle Sam only wants 29 percent of you. It seems that the other 71 percent would fail to qualify for military service because of physical, behavioral or educational shortcomings. That, in itself, is a sad fact.

So there you go, America. Those 29 percent would be fighting for all the rest of us. Here's a tip: Always... ALWAYS appreciate the men and women who serve... and a "Thank you for your service" is most deserved to each and every one of them.

To leave your family and serve is to put your life on the line... and that comes with a cost that we, as a country, have to work harder to repay.

So, to all of you service people, past and present:

THANK YOU FOR YOUR SERVICE!