What do they do with the 13th floor in many buildings and what happens to all the people who work/live there? As luck would have it, they call it 14. Phew!

All buildings tall enough actually do have a 13th floor of course... but we don't call it that because 13 is unlucky. And Friday the 13th is the most unlucky day. Why it is considered unlucky is conjecture but one popular thought is that there were 13 people present at the Last Supper on the 13th of Nisan (Maundy Thursday), the night before Good Friday, the day Jesus was crucified. Put them together and voila! Get it?

Thank God it is Friday or we might celebrate Easter Wednesday and wouldn't that seem odd?

But since superstition involves some belief in the supernatural, why are some supernatural non believers superstitious? To put it another way, would an atheist step on a crack and break his/her mother's back... or crack a mirror and get seven years bad luck... or knock on wood to keep bad from happening? But many do says the research,  even without anything to lose. Go figure.

The Science of Superstition, an article in a recent The Atlantic magazine reflects on why so many of us, atheists and other non-believers as well, are inclined to attach a higher purpose to natural events.  In his article, Matthew Hutson, author of the The 7 Laws of Magical Thinking says "No one is immune to magical thinking." 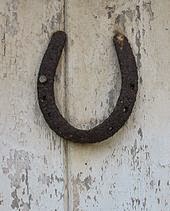 Physicist and Nobel Prize winner Neils Bohr was asked if he believed that the horseshoe he'd hung at his country home was lucky. "Of course not," he said, "but I understand it's lucky whether you believe in it or not."

Young children from both believer and non-believer homes prefer explanations like "Maggie's house burned down to teach her not to play with fire anymore." As we age we know that isn't true, but we still seem to attribute such things to bad luck or fate or 'something.' It's hard to fathom that bad things just happened for no reason at all.

"In a study... self-identified nonbelievers began to sweat when reading aloud sentences asking God to do terrible things. ('I dare God to make my parents drown.') Not wanting to 'tempt fate' they stressed out just as much as believers did."

"Subconscious religious belief seem to increase when we are reminded of our own mortality as in 'There are no atheists in foxholes.'

"Magical thinking is not just a result of ignorance or indoctrination," says Hutson, "it appears to be a side effect of normal, socially adaptive thinking.

"Fear is another driver of irrationality. In a British study of non believers, subjects were told to imagine an encounter with a self-professed witch who offered to cast an evil spell on them. An observing scientist speculated that about half of the group would accept the hex without concern, yet each of them said that, personally, they'd decline the offer."

Of the eight separate and independent studies used in this article, observation seemed to show that one of the few true avenues to atheism may be autism: "The more autistic traits a person had, the less likely he or she was to believe in God." Try telling that to scientists who, among their peer group show only one in three (see last post) believe in God.

As for me, I am still captivated by magic and more joyful believing IT IS truly a happening when an assistant is sawed in half, knock on wood.

Oh, and by the way, I really did see a GHOST when I was seven-years-old. I REALLY DID!