Lions and Tigers and Bears, Oh my...

Have I got a blog post for you today! Not only lions and tigers but elephants and giraffes and monkeys and wildebeests and zebras and ostriches, oh my. 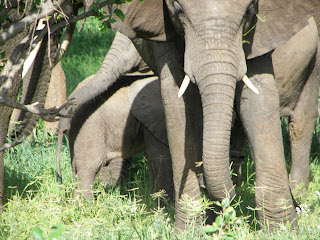 It all started when Ringling Bros. and Barnum & Bailey Circus rightfully decided to retire their elephants for good. Elephants in the circus had served, to the delight of big-top patrons everywhere, for more than 100 years. We all said goodbye to Mable, April, Asia, Luna and Tonka on Sunday, May 1st. They we welcomed with a full banquet at Ringling's 200-acre Center for Elephant Conservation in Florida where they will live. 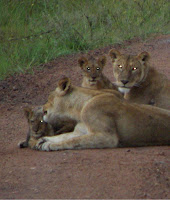 Also able to retire--at last--were 33 lions rescued from Colombia and Peru circuses that were airlifted to their new South Africa home. Bred in captivity, many of the lions were mistreated and mutilated by breaking their teeth and removing their claws. Because they cannot hunt, their Eden will be the Emoya Big Cat Sanctuary where they will have large African expanses to enjoy at long last.

And as if to prove our love of these creatures is no fluke, The movie remake of Jungle Book is one of this year's biggest hits. We are true believers. We LOVE pets, to the tune of 150 million dogs and cats--about one for every two of us. And about 80 % of us refer to ourselves and mom and dad when talking to them. Only parrots answer back and they think it is ridiculous... but what do parrots know?

Nothing of our love of these animals, however, was a greater thrill than being able to travel to Africa and experience them in their own environment. Going to Kenya, Tanzania, South Africa, Botswana, Namibia and Zambia three times only makes you want for more.


Yes, we saw elephants almost everywhere and so close that it was sometimes frightening. At one point, our open vehicle was stuck in a rut and before help arrived, a pack of 20 or more elephants surrounded us while walking by, wondering what to make of the whole thing. I was less than 10 feet from a big bull at eye level... and as he flapped his ears while staring at me, I was as dead-still and non-staring as I could be. 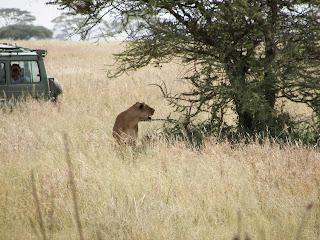 Then there were lions, perhaps the most majestic of all. With our guide and in open vehicles, you can get so very close to animals who would attack if you were outside the vehicle. The animals though accept the vehicle as just part of the territory and pay little attention.

And yes, it can get a little scary. We sat for 30 minutes once as we watched two close lions in their mating ritual.  The male walked casually withing a few feet of our vehicle at one point... and you know that in a second, a lion could have you for a snack if desired. The guides who do not carry guns--are natives that have been thoroughly trained for the job, and they do know their stuff. They have to. 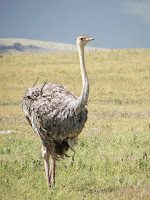 Like ostriches? I do. There were plenty of them. 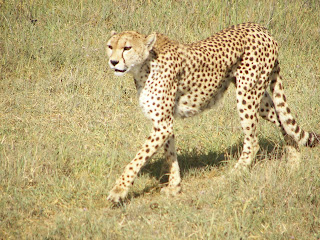 And Cheetahs! We saw this mother teaching her two youngsters how to stalk and how to hunt. They were eyeing a zebra when they were spooked and ran before the attack. 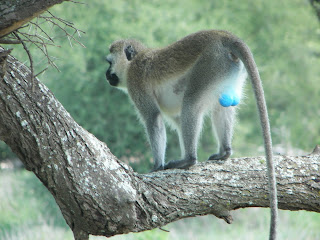 And monkeys, lots of monkeys. No, we didn't doctor this photo. That's what he looked like. 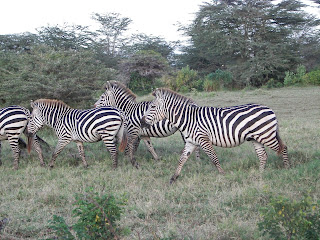 Zebras too... the prey. We saw one with a bloodied shank. Obviously, our guide told us, he escaped last night... and tonight he will be taken.
We wondered why the animal was not killed to avoid that terrifying fate. The guide said they do nothing to alter the nature of the battle for survival. 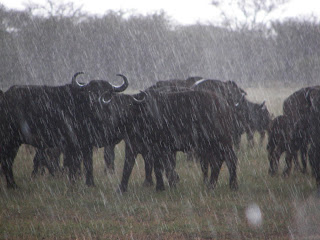 Wildebeest are also a delicacy for the predators. 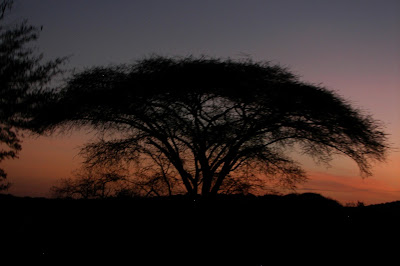 And the African sunsets... they were always magnificent!

Yep, we took all the pictures... and there's more, of course, which I will share later. Hopefully, this will do for now.