"Lions and tigers and bears! Oh my!"
... A direct quote from Mrs Noah as she watched the animals, two-by-two, board the ark...  NOT!

Actually, Dorothy (Judy Garland) said it in The Wizard of Oz when all she had to contend with was a tornado, the Wizard, the wicked witch of the West, a bunch of Munchkins and her friends, a cowardly lion, a scarecrow without a brain and a tin man without a heart. Sounds like my old bowling team.

Anyhow, the subject today is animals...  human and the other kind. And if you want to see how it all began, (evolutionists, you can skip this part) take a look at Robert Crumb's illustrated Book of Genesis. It is truly cool.

Crumb, known for his comic book style and some rather "unusual" drawings and underground comic characterizations, stuck right to the book (that is, The Bible) for this one. Actually, his depiction is from the King James Bible and a 2004 translation called The Five Books of Moses... so Catholics, sit this one out unless you go immediately to confession. As an added bonus, you will finally get to see what God, Adam and Eve and that damn snake look like. 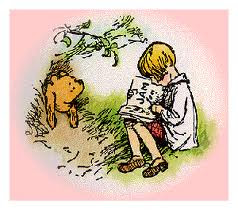 Other big news on the animal front... as told by Associated Press writer Jennifer Quinn who reported it so 'Milnesque:'

When we left them, Christopher Robin was going away, and Things were going to be Different.

Now, more that eight decades later, a rumor is sweeping the Hundred Acre Wood. According to Owl, who heard it from Rabbit, who heard it from Piglet, the adventures are about to resume. It falls to the bear to pass on the news to Eeyore.

And so it is... after 84 years, the first authorized sequel to A.A. Milne's classic tales, Return to the Hundred Acre Wood, is now on sale. Just that thought brings back rich memories of those bed time stories read when my kids were as young as theirs are now.

Alan Alexander Milne, 1882-1956,  was an English novelist and playwright who gained legendary status as the author of the Winnie-the-Poo series of children's tales and poems. As beloved as his characters in the series were to the children, the stories weren't written for his son... or children at all.  They were intended, he said, for the child within us, as simple lessons of life.

And, looking as some of Pooh's quotes, what lessons they are:

When late morning rolls around and you're feeling a bit out of sorts, don't worry; you're probably just a little eleven o'clockish.

When looking at your two paws, as soon as you have decided which of them is the right one, then you can be sure the other one is the left.

To the uneducated, an A is just three sticks.

Those who are clever, who have a Brain, never understand anything.

Owl hasn't exactly got Brain, but he Knows Things.

If you want to make a song more hummy, add a few tiddely poms.

Don't underestimate the value of Doing Nothing, of just going along, listening to all the things you can't hear, and not bothering.

Just because an animal is large, it doesn't mean he doesn't want kindness; however big Tigger seems to be, remember that he wants as much kindness as Roo.

If the person you are talking to doesn't appear to be listening, be patient. It may simply be that he has a small piece of fluff in his ear.

My spelling is Wobbly. It's good spelling but it Wobbles, and the letters get in the wrong places.

It is more fun to talk with someone who doesn't use long, difficult words but rather short, easy words like "What about lunch?

Did you ever stop to think, and forget to start again?

I used to believe in forever
But forever's too good to be true.

Email ThisBlogThis!Share to TwitterShare to FacebookShare to Pinterest
Labels: The Book of Genesis Robert Crumb, Winnie-the-Pooh