These are the richest people in the world... and below them are the poorest: 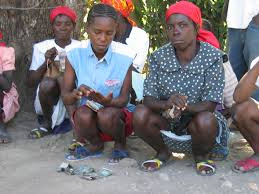 These are the poorest people in the world. Two-thirds of the world's poorest people live in just five countries, according to a new World Bank study--India, China, Nigeria, Bangladesh and the Democratic Republic of Congo. It is somewhat understandable that India and China, the two largest countries in the world with 2.5 billion people, would have a large number of poor. The U.S. is third largest with a mere 340 million.

The top one percent of the rich have more wealth than all the rest of us in the world. (If any of you mega-billionaires and millionaires are reading this, excuse me, I didn't mean you.)

In The United States, even though we have eight of the top ten richest.. a great number of us below that incredibly rich level are well off by any standard, a greater number pretty OK, some sort of OK and about 14.5 percent of us have to exist below the poverty level--not OK at all.

Those 45 million in poverty are living, breathing and surviving, trying to do better like the rest of us but with unique problems and no means to address them. These are the disadvantaged where the stairs to an upper level don't come down far enough for them to climb.

I was poor once... not dirt poor or desperately poor as many are... just regular poor. And that was in a most different time under most different circumstances.

My family didn't have much, but my sister and I didn't know what we might have been missing. We had food and lived in a small, variable rent house owned by my grandparents. Rent was $20/month when we had it, $0 to minus $20 (they paid us) when the situation required. Living close to grandma and grandpa was like having a fairy godmother and godfather. We lived  in a lower class part of town at a time before two-stall garages, second cars, electronics beyond a light switch, television, lawn tractors, outdoor grills, kitchen gadgets, snow blowers, etc. so we had less to covet.  Internet, cordless phones, video games... what were those?

Simple is not possible today. The pressure is on to live to survive if you are poor. The chasm between high income and little income continues to grow wider as cost-of-living rises without earnings to match for the poor. And to answer at least one critic, many of those in poverty do have cell phones because today, that functions as a lifeline that circumstances demand. That does not equate to being able to afford basic health insurance or take even one step closer without two backward. It's not "Either this or that." It's "How can I and my family survive at this level."


It's as if we believe some of us are more important than others and taking care of Number One doesn't go any further than ourselves and those like us. That's not a world we can live in. As those below us  grow proportionally less well off, (the richest gained 14 percent in wealth last year) the gap between haves and have-nots becomes almost unbridgeable.

We are governed by the rich, the almost rich and the average rich. Does trickle down mean it is their responsibility to get richer... not that there is anything wrong with that. But can those with great power see beyond partisan politics and winning to realize their responsibility runs far deeper than that?
For those who view a future for our children... and our nation, if it's not win-win, then it's lose-lose by default.

Which is it to be for us?

PS: That said, thank goodness for the rich. The moneyed can and often do act incredibly benevolent. and by their actions, they do help us all. It's not the money we have... or don't have. It's how lives are lived and action taken that makes a nation.

If President Harry Truman , who started his political career as a haberdasher no less, became a symbol of responsibility and action, then, we can ask ourselves, just where does the buck stop?

Email ThisBlogThis!Share to TwitterShare to FacebookShare to Pinterest
Labels: the poor, the rich