If all the world had a laugh track, nothing would be funnier than elevator music... Aunt Minnie's funeral... the Cubs losing... slipping on a banana peel (wait, that's already funny)... 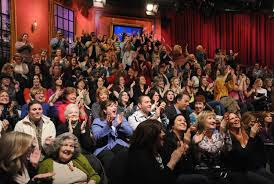 Nothing makes me feel more duped than to listen to the laugh track behind the Big Bang Theory or even I Love Lucy and think laughing was my idea.

So after all these years of bitter--but hilariously funny--resentment over this fake, not even realistic laughter that starts at the same moment and stops as if someone put a giant hand over the audience's collective mouth, sometimes at the right spot, most often trying to make something unfunny, funny, I sought to understand more.

Well, I did. Here's the skinny:


Charles "Charlie" Douglass, a sound engineer with CBS Radio after World War II, is the man who invented the laugh track. So who can get too mad about a guy who helped develop shipboard radar systems for the Navy, no doubt saving many lives.

Before television--in 1948 there were only 100,000 televisions in the United States--audiences often experienced comedy listening to the radio or watching live performances as part of a studio audience. Live audiences didn't always laugh in the right places or at the correct moment. So when the show was broadcast, crowd reactions often went amiss or just weren't that funny. It was a problem for the producers and listeners/watchers alike.

Want to see what I mean? Watch just a few minutes of this Big Bang Theory episode filmed on a sound stage with no audience and see what you think. The laugh track or sound augmentation has been stripped away. Not much fun, right?

If a joke did not get the desired chuckle, Douglass added appropriate laughter. If a live audience laughed too long, he gradually muted the laughter. This was known in the industry as "sweetening" to get a "just right" response.

Comedian Milton Berle, listening to a post-production editing session, felt a joke he told fall flat. After Douglas inserted a laugh, Berle said, "See? I told you it was funny."
Soon, Douglass was simulating the audience response for Bewitched, The Munsters, Beverly Hillbillies, The Andy Griffith Show, The Brady Bunch and more. While this augmentation was controversial at the onset, it soon became standard practice. His "laff box" was kept secret at first. It actually was a box, about 2 feet tall and operated like an organ. The device was padlocked so his technique could not be known. Few in the industry ever witnessed Douglass at work. The 'laff box" actually turned up in a 2010 episode of Antiques Roadshow to be valued at $10,000.

Today, it is a digital device about the size of a laptop with a great many more laughs and other human sounds. The technique has evolved... though sometimes, not for the better because no matter how much laughter, some things are still turkeys.

But I am now a believer of the need--though not every imposed laugh track fits my taste or worse, works to milk a lame situation--laughter is worth it. It still bothers me to be instructed when to laugh. But then again, laughter is always worth it.

Wonder where the quote "Laugh and the world laughs with you... " comes from? Read on and be in awe.

It was poet Ella Wheeler Wilcox, born in 1850, who knew, even that far back, what is really important in life. Her poem "Solitude"  resonates through time and seems to have special relevance today. Here's her first few lines for you sluggards who will read no further, but do yourself a favor and read the whole poem below and take it to heart. It's worth it.

BY ELLA WHEELER WILCOX
Laugh, and the world laughs with you;
Weep, and you weep alone;
For the sad old earth must borrow its mirth,
But has trouble enough of its own.
Sing, and the hills will answer;
Sigh, it is lost on the air;
The echoes bound to a joyful sound,
But shrink from voicing care.
Rejoice, and men will seek you;
Grieve, and they turn and go;
They want full measure of all your pleasure,
But they do not need your woe.
Be glad, and your friends are many;
Be sad, and you lose them all,—
There are none to decline your nectared wine,
But alone you must drink life’s gall.
Feast, and your halls are crowded;
Fast, and the world goes by.
Succeed and give, and it helps you live,
But no man can help you die.
There is room in the halls of pleasure
For a large and lordly train,
But one by one we must all file on
Through the narrow aisles of pain.
Posted by Jerry C at 3:58 PM