A Tribute to The Man in the Moon... really, there is one 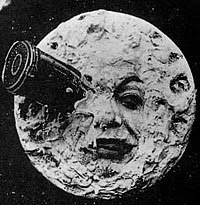 No, I don't mean this guy, depicted in a 1902 French film, Le Voyage dans la Lune. (Those French, they have a different word for almost everything.) The movie was a furthering of Jules Verne's 1865 novel, From Earth to the Moon, but it wasn't til that glorious day in 1969 that Neil Armstrong actually set foot on our celestial shadow.

It is this man, Eugene Shoemaker, the only man
that is actually buried on the moon. Didn't know that, did you?

Trivia question: How many humans have been to the moon? Answer: 24, with 12 of those actually setting foot on its surface... not counting Eugene Shoemaker.

Actually, a small number of us have been "buried" in space forever... or to be re-creamated if their tiny projectile reenters earth's atmosphere. There is a company, Celestis, which seeks 'remnant space' from anyone, including NASA one time, that puts payloads in space, contracting for any small unused ride-share area that might be available for a celestial memorial burial. Celestis's first memorial flight was  in April, 1997 from the Canary Islands on a rocket payload that also contained the ashes of Gene Roddenberry, the Star Trek TV producer and original Trekie and LSD guru Timothy Leary, plus 22 other nerds and normals.

So how did Eugene Shoemaker 'score?'  He and wife Carol with David Levy were the 1994 discoverers of the Shoemaker-Levy comet that fractured and crashed into Jupiter, a first such observable celestial collision. Shoemaker had a celebrated career helping to create the field of planetary science. When he died in a 1997 car crash, a close colleague petitioned to have the wanna-be-but-couldn't-make-the-cut Apollo astronaut memorialized in the grandest fashion. NASA, not in the space-burial business, liked the idea as a one-time shot and in January 1998 his remains were on its Lunar Prospector sent to crash into the lunar south pole ice cap. Thus, Shoemaker is the only man actually buried on the moon.

The 'urn' containing some of his ashes is a polycarbonate capsule wrapped in brass foil and laser etched with his name and dates over an image of the Hale-Bopp Comet and Arizona's Meteor Crater where he trained to be an Apollo astronaut. There was also this quote from Romeo and Juliet:


And when he shall die
Take him and cut him out in little stars
And he will make the face of heaven so fine
That the world will be in love with night
And pay no worship to the garish sun. 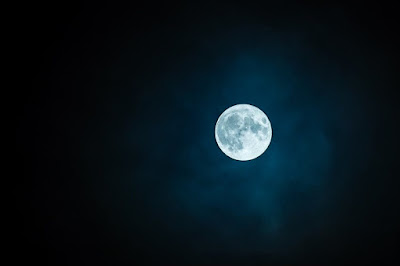 Rest in peace man in the moon.

Final note: To date, Celestis has flown 14 missions. Shoemaker's burial on a celestial body, says Charles Chafer, CEO and founder, "may be the first but it won't be the last. I think we are entering an age of abundance in terms of commercial access to space. The largest hindrance to space burial is finding a rocket to take even a small amount of remains out into space, but with the rise of independent programs such as Space X and Jeff Bezos' Blue Origin, the number of opportunities to fly those secondary payloads is increasing , meaning that more people will have the opportunity to be sent into the cosmos."
Posted by Jerry C at 11:36 AM

Email ThisBlogThis!Share to TwitterShare to FacebookShare to Pinterest
Labels: man in the moon