TODAY'S RIDDLE: What is black and white and red all over? 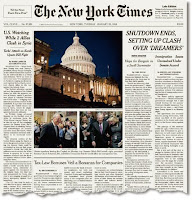 Ok, ok. I know the riddle is totally wrong for three reasons:
Today, newspapers are disappearing by the hundreds and newspaper circulation and readership is on a downhill slide that quickly becomes 'the new normal' on how we see and learn things.

Most millennials and later-born get their news on line or on television... the news-lite version that is more-to-the-minute but of less substance and range, unless you count the entertainment portion an news one has to know.  It is also less dependable as news because it is mixed with every opinion on everything from everyone on social media... most of which is believed without doubt if it fits your personal 'bent.'

Social media didn't invent 'fake news' but it did perfect its widespread dissemination.

This past week, a New York Times technology writer's story, "For Two Months, I Got My News From Print Papers. Here's What I Learned," painted a most interesting picture of what happens when newspapers fall out of our life-view.

No, this is not a call to go back to newspapers, though that would certainly improve news credibility. We have passed that point in our technology-enhanced existence. But yes, newspapers still play a vital role if only as bell-weathers of the news basics with the five 'Ws' and an 'H' (Who, What, Why When, Where and How) of substance.

With the proven realization that fake news spreads faster than real news--usually, it is more spectacular or surprisingly hard to believe, yet believed and spread by a 3 to 1 ratio on social media with a tap of the finger--all news becomes suspiciously less credible.

We create the world we live in and yet, we are the ones who don't take out the garbage that comes with it. As our president might tweet: "SAD!"

NEXT: How easily fake news is created. A primer you will recognize.