Can someone be bad and good at the same time? Dave can. He is the man with a plan to save the USA with just a few simple steps.,,, some of which you will find hard to believe. 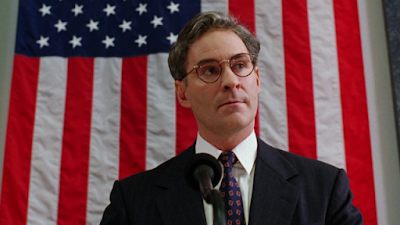 It featured actor Kevin Klein as both The Good President and The Bad President. Movie critic Roger Ebert says:

"Dave" takes that old plot about an ordinary person who is suddenly thrust into a position of power, and finds a fresh way to tell it. The movie's about a nice guy who runs an employment agency and is otherwise undistinguished, except that he happens to look exactly like the President of the United States. When the president wants to sneak away for a quickie with his mistress, he is recruited by the secret service to act as a stand-in. Then the president has a stroke and Dave is hired on a more or less permanent basis."

The movie unfolds a lot like director Frank Capra's It's a Wonderful Life, with a number of twists and  turns that sends everyone viewing, home happy. I won't divulge much more because it you haven't seen Dave, you should, and if you have, then you must watch it again. (Amazon Prime Video.)

Now about saving the United States:

One of the key scenes shows Dave, acting as the President, saving funding for a child daycare center so needed and desired by the the real President's wife (Sigourney Weaver), who doesn't yet know Dave isn't her real husband. All this with the bad guy in the back ground, powerless to stop him.Yes, it sounds confusing, but trust me, the movie  is worth it.

And while finding the critical funding for the important stuff--as acting President Dave does with a flair--is small potatoes to help reduce our $21 trillion and growing national debt,  it is step one.

Cutting federal waste, duplication and weird or unnecessary spending of grants--in excess of $1/2 billion of our hard earned tax dollars dollars in 2016 alone--is just one of the many ways we can gain without spending a dollar. (Says Congress, "What fat?")

Actually, anyone who has bought a house or a car or financed anything big knows, spending an extra hundred or thousand dollars at that time comes easy in comparison to the big number... but it sure adds up in what we have to repay with interest added. Right now, each American is on the hook for $65,000 of our $21 TRILLION national debt.!

Not counting schools or roads or municipal governments or prisons, or life's necessities, we also paid for *these real grants:
Oh, there are more, but you get the picture.

So thanks Dave for showing the way. But as I promised, there are more-- I said MORE--paths to free money. Next blog takes you on an unbelievable fantasy of free money... with a touch of reality.

*Caveat: Not to say every grant is unworthy, but many are quite suspect and  help  local congresspersons get re-elected. Should we all pay for special interests that may be a whole continent away from where we live,  or is it, 'You scratch my back and I'll scratch yours?