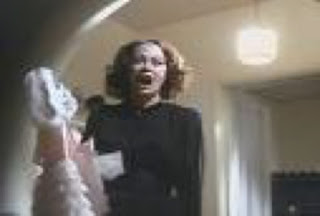 Have you ever seen the 1981 classic movie "Mommie Dearest," about old time film star Joan Crawford? It was from a book her daughter, Christina, wrote a few years earlier, best recalled by the line "I told you! No wire hangers, ever!"

Crawford, a compulsive neurotic, finds one of her 12-year-old daughter's dresses on the forbidden hanger.  She angrily yanks it from the closet, rips off the hanger and starts hitting her daughter with it as she sputters that line. In a rage, she throws clothes all over the place. It's scary, actually.

Well, Crawford may have been painted as an obsessed housekeeper, manic and controlling in real life, but I'm with her about the hangers.

Americans throw out 3.5 billion wire hangers every year! That adds up to more than 100,000 tons of typically non-recycled steel... because those damn hangers clog the recycling machinery. I understand. Last time I took 3.5 billion hangers from my closet--I only intended to take one--they all got tangled and came out as one jangled mess with a life of its own.

So you think that is overkill? How about the two IRS agents that hand-delivered an unpaid tax bill to the owner of a Sacramento car wash? The tax overdue was 4 cents, owed since 2006. With late fees and charges, the total came to $202.31.  Wish I could find an investment that paid that well.

Maybe I'm being a little harsh though. By IRS estimates there are $300 billion in unpaid taxes owed the government... and we, as citizens, should be happy those deadbeats are being chased down, one-by-one. By my calculations, with this 4 cents, there is probably only $299,999,999,999.96 owed. So we're gaining on it, right?

Did you hear about the Florida guy who burglarized a police car? He stole handcuffs and a Taser gun, among other items. He subsequently called police and turned himself in. The cops who picked him up found that he had accidentally handcuffed himself... and also, accidentally Tasered himself. I think that his defense should be that he accidentally broke into the police car too. It fits his modus operandi.

The tee-shirt sould have read: "I went to Colorado to win $43 million and all I got were some waffles."

That really happened when a woman, playing a penny slot machine, hit the jackpot for $42.9 million, according to the payout screen. Casino authorities said, "Wait a minute... we were just testing the machine and the wrong read-out was shown." They say the max payout would have only been $251,000, so the $42.9 million was a teensy-weensy little error that could happen to anyone. However, the casino folks didn't want her to go home without anything... so they gave her a free breakfast... and presumably, her penny back. After all, fair is fair.

Note to all you Trekkies out there, GROW UP!

A John Hopkins University physicist said that if the Starship Enterprise ever really traveled great distances at "warp speed," as it did often, everyone on board would be killed. Actually, the physicist simply explained that traveling at 99 percent the speed of light (about 180,000 miles-per-second), the protons would be stripped from the atoms and so-on and so-forth.... ho hum. (Those physicists have a way with words... which is why so few physicists become successful comedians.) Killed is enough explanation for me to say, "Get a life, you guys." Only Spock was real, you fools.

And finally, A Santa Fe man is suing his neighbor for $530,000 in damages because she is disturbing his "electromagnetic sensitivities." He says the neighbor's laptop and iPhone are causing him nausea, vertigo and body aches and she is totally refusing to "work with me" on this.
Posted by Jerry C at 3:33 PM