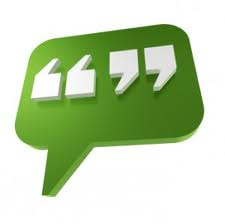 I like a good quote. Nothing too serious, mind you. Quotes are to be enjoyed, not taken as word from on high... unless they come from You Know Who.

Quotes like: "There will be a rain dance Friday night, weather permitting." George Carlin

Or: "When you are in love with someone, you want to be near him all the time, except when you are out buying things and charging them to him" Miss Piggy

Try these on for size:
You could quote poetry:

"Roses are reddish
Violets are bluish
If it weren't for Christmas
We'd all be Jewish.
Benny Hill (1925-1992)

"There are three reasons why lawyers are replacing rats as laboratory research animals. One is that they're plentiful, another is that lab assistants don't get attached to them, and the third is that there are some things rats just won't do."  Unknown


It could be contemporary:

Or about our quest for the perfect body:

"I asked the clothing store clerk if she had anything to make me look thinner, and she said, 'How about a week in Bangladesh?'" Rosanne Barr

Could even be a high school cheer (unofficially):

We don't drink!
We don't smoke!
Norfolk!
Unknown... but ask the students

Or it could be funny:

"Last time I tried to make love to my wife nothing was happening, so I said to her, 'What's the matter, you can't think of anybody either?'" Rodney Dangerfield, of course


But you can only go for quotes in small doses. Too many overwhelm the sense of irony... and there is nothing I hate worse than ironing. I picked up a copy of Robert Byrne's book, The 2,548 Things Anybody Ever Said and realized how fast you can get full. But if you take your time and read just a few pages every so often, you would be amazed at how long it takes to get through 2,548 things.

All in all, I learned there are a lot of quotes by this guy, Unknown and his brother, Anonymous. I also learned the impossible:

"Fix this sentence: He put the horse before the cart." Steven Price


But what better than these important lessons from Jack Handy to finish this off:


"Better not take a dog on the space shuttle, because if he sticks his head out when you're coming home his face might burn up."


"For mad scientists who keep brains in jars, here's a tip: Why not add a slice of lemon to each jar, for freshness."

"If the Vikings were around today, they would probably be amazed at how much glow-in-the-dark stuff we have, and how we take so much of it for granted."

"Maybe in order to understand mankind we have to look at that word itself. MANKIND. Basically, it's made up of two separate words "mank"and "ind." What do these words mean? It's a mystery and that's why so is mankind."


"The crows seemed to be calling his name, thought Caw."

Last one, I promise: "The first thing was, I learned to forgive myself. Then, I told myself, "Go ahead and do whatever you want, it's okay by me."