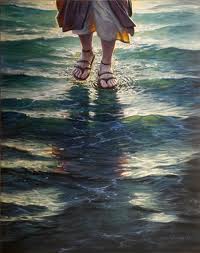 You remember the story... bad storm at sea... giant waves violently rocking the boat... fishermen scared for their lives... THEN, ACROSS THE SUDDENLY CALMING WATERS, JESUS WALKS TOWARD THEM.

Well, that was then... before the days of the big oil spill in the Gulf of Mexico. So tell me what went wrong when police found Jesus... swimming, not walking on water, far off shore in those Gulf waters?

OK, so that is borderline sacrilegious, but maybe it was the wrong Jesus. In fact, it was. Jesus Mares was the guy, not the Jesus H. Christ I pray to. And yes, the OAO does have a sense of humor... after all, he created us, right?


Elsewhere in the world of incredible happenings, two Japanese nerds recently set a record calculating pi to the five-trillionth digit. And... (yawn)... yes, it IS A NEW WORLD'S RECORD! Hmm, I wonder if they still make those plastic pocket protectors?

To get back to the real problems in the world, we need look no further than Ft. Wayne, Indiana--about 125 miles east of the heart of the Midwest.  There, city fathers had to decide if they would name Ft. Wayne's newly built government center after a former beloved mayor, which was the vote of the people. In the end, they opted NOT to follow their constituents' wishes to call it "The Harry Baals Building." And that's how "Government Building One" got its name.

Reminds me of a similar vote by the people of Peoria to nickname its new franchise hockey team, "The Prancers." Lasted for one season... the nickname, I mean. Too much laughing by the opponents.

If automobile stories are your thing, then you might find this interesting: One of the first motor cars ever imported to China as a gift to the Empress Cixi (pronounced Cixi), was a new, handmade 1901 Duryea. As the car was being shown, the driver, a little giddy from rice wine, lost control, ran over and killed a palace eunuch.  Today, there are 10,000 new cars on the road every day in Beijing alone, as China rushes to be number one in traffic jams... and DUIs too.

Oh, and China also grows nearly half of the world's tobacco (take that North and South Carolina) which makes sense when you realize one out of four Chinese smoke. Sometimes, being number 1 isn't as good as it sounds.


A Mercedes driver in Switzerland was stopped for speeding... he was clocked at 105 mph over the 75 mph limit! The Swiss determine fines based on the driver's personal ability to pay. He was rich. Fine: $1 million!

Last amazing thing: Utah's Dugway Proving Ground Army facility was locked down for 14 hours recently... because one-fourth of a teaspoon of a nerve gas agent was unaccounted for. The nerve agent, VX, was finally found in a mis-labeled container. Now, can you imagine... 1/4 teaspoon...

What exactly is VX and how bad is it? I was curious so I "googled" it.

From the government website, The Center for Disease and Prevention, a few "highlights:"
VX is a human-made chemical warfare agent classified as a nerve agent. Nerve agents are the most toxic and rapidly acting of the known chemical warfare agents. They are similar to pesticides (insect killers) called organophosphates in terms of how they work and what kinds of harmful effects they cause. However, nerve agents are much more potent.

VX was originally developed in the United Kingdom in the early 1950s. It is odorless and tasteless,
an oily liquid that is amber in color and very slow to evaporate. It evaporates about as slowly as motor oil. VX is not found naturally in the environment.

Symptoms will appear within a few seconds after exposure to the vapor form of VX, and within a few minutes to up to 18 hours after exposure to the liquid form. It is the most potent of all nerve agents. Compared with the nerve agent sarin (also known as GB), VX is considered to be much more toxic by entry through the skin and somewhat more toxic by inhalation. It is possible that any visible VX liquid contact on the skin, unless washed off immediately, would be lethal.

All the nerve agents cause their toxic effects by preventing the proper operation of the chemical that acts as the body’s “off switch” for glands and muscles. Without an “off switch,” the glands and muscles are constantly being stimulated. They may tire and no longer be able to sustain breathing function.

Immediate signs and symptoms of VX exposure...
well, death is one, for sure (My comment).

Socrates, I'm sure would agree, mankind has certainly come a long way from hemlock.

Just want to end on an up-note:

Attempt 1: Socrates walks into a bar and the bartender asks him, "Did you go to Harvard?" He answers, "Yale." The bartender responds, "DID YOU GO TO HARVARD?"

Attempt 2: Socrates walks into a bar with a duck on his head. The bartender says, "Can I help you?" The duck says, "Yeah, you can get this guy off my butt!"

Attempt 3: Socrates walks into a bar and orders a beer. The bartender says, "Okay, I'll serve you a beer, just don't get any ideas."