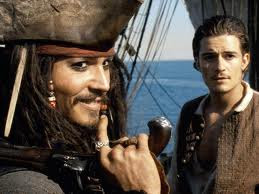 Enjoyed author Michael Parker's  promo appearance at our local book store (one of the three that still exist) for his new book, The Watery Part of the World. The setting for his historical fiction tale is the early 1800s and the main character is Aaron Burr's daughter, Theodosia, who is taken by pirates off the coast of North Carolina.

Anyhow, he talked about writing 'real pirate dialog' instead of the usual "Yo ho ho and a bottle of rum" stuff featured in the Pirates of the Caribbean movies..." not that there is anything wrong with that. Well, they made a bundle of pirate gold in a dead man's chest, for sure. What I didn't know, however, is that the movie idea came from the attraction of the same name at Disney World and Disneyland. Wow! That revelation brings with it, a plethora* of ideas.

*Thanks to The Three Amigos for the best use of plethora in a sentence:
Jefe: We have many beautiful piñatas for your birthday celebration, each one filled with little surprises!
El Guapo: How many piñatas?
Jefe: Many piñatas, many!
El Guapo: Jefe, would you say I have a plethora of piñatas?
Jefe: A what?
El Guapo: A plethora.
Jefe: Oh yes, El Guapo. You have a plethora.
El Guapo: Jefe, what is a plethora?
Jefe: Why, El Guapo?
El Guapo: Well, you just told me that I had a plethora, and I would just like to know if you know what it means to have a plethora. I would not like to think that someone would tell someone else he has a plethora, and then find out that that person has no idea what it means to have a plethora.
Jefe: El Guapo, I know that I, Jefe, do not have your superior intellect and education, but could it be that once again, you are angry at something else, and are looking to take it out on me? (FYI: A plethora is two or more pleths.)

So I thought... what rides haven't been both a book/movie AND an attraction? All of a sudden, I had two best sellers: A mystery novel--The Spinning Teacups of Arsenic and Lace and a 'can't miss' musical-- It's a Small, Small World of Trouble and Woe starring all the cutest little kids in the world.

Now how does that song go again?
Posted by Jerry C at 9:50 PM