If the world is represented by 100 people, then... 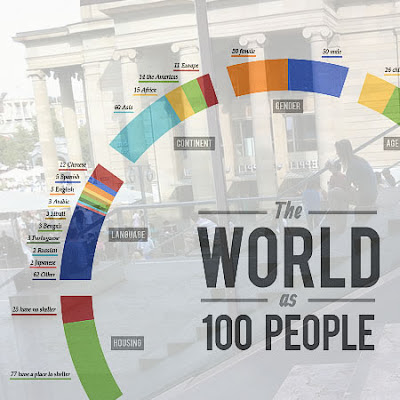 So, in the real world of 7 billion people:

If you have food in your refrigerator, clothes to wear, a roof over your head and a place to sleep, you are richer than 75% of the world.

If you have money in the bank, in your wallet and some spare change, you are among the top 8% of the world's wealthy.

If you woke up this morning with more health than illness, you are more blessed than the million people who will not survive this week.

If you have never experiened the danger of battle, the agony of inprisonment or torture or the horrible pangs of starvation, you are luckier than 500 million people alive and suffering.

If you can read this, you are more fortunate than 1 billion people in the world who cannot read at all.


Kinda makes you think, doesn't it? That "Do unto others... " thing takes on little more meaning in real life.

Caveat: These are aggregated statistics from several sources and are accurate to estimate order of magnitude.
Posted by Jerry C at 10:19 AM

Email ThisBlogThis!Share to TwitterShare to FacebookShare to Pinterest
Labels: 100 people, Do unto others, earth, statistics