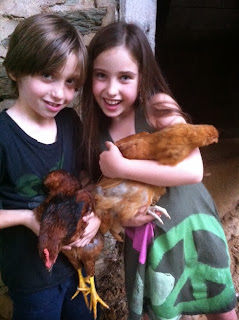 What is Chickery chick? It's music from the past... way past, like this 1945, Number 1 song on the Hit Parade by Sammy Kaye. While music before TV, the internet, rock and roll, Motown, grunge, new age, etc. was different (lots of novelty songs to 'catch your ear'), music then and music now has always had a magic quality.

Once there lived a chicken who would say "chick-chick"
"Chick-chick" all day
Soon that chick got sick and tired of just "chick-chick"
So one morning he started to say:

Oh, there's more. If you don't know the words and the tune to Chickery chick, check it out here. It's cute.

So what's the magic quality? "Psychologists believe laws, stories and customs were presented as poems, chants and, eventually, as songs, in order for them to be memorized and recalled accurately. The idea was that the chant would help people to remember large sets of information across the ages. Music aids memorization by providing a rhythm, a rhyme and often, alliteration. All that structure is the key to unlocking information stored in the brain--with music acting as a cue." *

Many researchers think the brain function that responds to music evolved long before those related to language and that humans developed music and dance to aid in the retrieval of information.

Think it's an accident that most commercials include music? At today's Super Bowl prices --$4 million for a 30 second spot, if one was still available--advertisers will do everything they can to be remembered.

That's also why even patients with advanced Alzheimer's dementia have been know to sing along to a familiar song... or even play the piano or other instruments they once knew. (Visiting an Alzheimer wing a few years ago, I heard the most magnificent violin concerto coming from one of the rooms. Tracking the sound down, I was amazed that it was coming from the bow of a professional violinist who couldn't even remember his name or family.) Ever watch a concert and see everyone in the audience mouthing familiar songs as the artist sings or plays them? We're that good without giving it much thought.

We just remember songs better than we remember grocery lists (Hmm. What rhymes with spaghetti?), where we put the keys or what my wife/husband said just two minutes ago.  Now if you try real hard, can you remember the Alphabet Song? Good! Lucky for us, the letters go in that order or we would really be mixed up.

Memory is triggered by songs and similar structures like rhymes and associations we create. After reading The Memory Book by Harry Loraine and ex-basketball player Jerry Lucas many years ago, I tested the theory. On a family vacation when my oldest was just 10, I used techniques of association taught in the book to see if the kids could recall long lists of unrelated things. After a short, simple explanation and a single read-though to help them build an association to the word, all but the youngest could repeat lists as long as 20 items--forward, backward and from any point I challenged them to start. And they could retain that memory and other lists as I tested them during our vacation, or as long as it was important to them. It amazed us all.

Sadly, it takes mental discipline to condition yourself to think this way until it becomes second nature--like doesn't every good habit? And it wasn't important enough for us to do, so we just struggle our best to retain our sieve-like memories. Now what was the name of that guy you were just introduced to one minute ago?

But for fun, unless you were born after these songs were sung, can you remember some of the lyrics to The Witch Doctor song? (... and he said, Ting, tang, walla-walla-bing-bang.... ) or that hauntingly beautiful It's a small, small world?

So there you have it. Now, with practice, your conversations at home and work will all sound like The sound of music, Oklahoma and The king and I  or a Dr. Seuss book so we will never forget where we put those glasses or keys again.

Memory is a funny thing... so much is in our head but getting it out... now that's another matter. Oh geeze... I forgot my pants again.

*Dr. Henry L. Roediger III, professor of psychology at the Memory Lab at Washington University in St. Louis.
Posted by Jerry C at 11:45 AM