"You don't always get what you pay for." 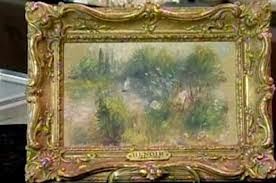 When buying art, don't be fooled, like the West Virginia lady who paid $7 for a box of kitschy treasures at a flea market a few years back. She HAD to take the painting because it was in the box she wanted.

What attracted her to the simple little box was a very cute leather-crafted Paul Bunyan doll that she was sure she could resale at a profit and an adorable plastic cow that she liked for her kitchen. The silly little picture, about the size of a post card... well, she thought the frame might be worth something if she removed the engraved Renoir plate from the front of it.

It just so happened that the annual Starving Artists painting sale was going  on in my hometown that same weekend. It offered hand-painted 'steals' for as little as $9.95 with Van Goghs for only $49.95.

AND, you can have this magnificent 'sofa-size' painting as your very own--with many more this size... and just as great to choose from--for only $69.95, none higher!

Now I ask you, who is the bigger fool? Why would you waste $7 on a painting no larger than a post card when you can cover your whole wall behind your couch with something this big, this awe-inspiring and this cheap?

Oh, the silly little Renoir it seems was painted by French Impressionist, Auguste Renoir about 1879. (So, "Ooh La La.") It is titled Paysage Bords de Seine, or Banks of the River Seine as I like to say in good old American. Those French have a different word for everything... and they go crazy over Jerry Lewis. Does that make me want that painting, even if it would bring around $100,000 when sold at auction?

All said, how silly would that tiny little Renoir look on the red accent wall behind my massively
comfortable, overstuffed Scotch-plaid recliner couch? I'd probably have to buy a new frame... something much simpler, perhaps in black. No thank you! I'm a Starving Artist man where your money always buys a lot of square inches of canvas and it only takes a hundred bucks or so to do the whole darned house.

A nice "sofa-size" would also enhance my last steal... a really nice plaster of Rodin's The Kiss which set me back 25 smackeroos at a Starving Sculptor tent sale next to a BP Station last summer.

The pleasure I get from the "Oohs" and "Aahs" from all my art critic friends is my greatest reward. And besides, these artists will probably be next century's famous dead people... and they probably are really starving.

PS: The Renoir was possibly stolen from a museum in 1951 and not seen since. Courts will decide the true owner.