There she is... Miss America... and other girl problems

Bess Myerson died. She was the first... and still the only Jewish Miss America in 1945. And she was something. Who would have thought that someone born in 1924 could have looked this beautiful?

Well, she was more than that. She worked for two New York City mayors and was instrumental in Ed Koch's election. She ran for Senate, appeared regularly on three different TV game shows, survived cancer and was acquitted on conspiracy, mail fraud and obstruction of justice charges brought (some say revengefully) by Rudy Giuliani. She was admired for her chutzpah (courage, mettle or ardor), outspoken and sought after. She was clever and quick thinking. In other words, she was an admired woman and Jew at a time when not all women or Jews were.

The Miss America Pageant was big at the time. Given how we have grown in understanding and perspective, the Bess Myerson of that time would not have been involved in today's banal excuse for a television program.

On July 1, 2014, Michelle Howard became the first woman and the first African-American woman to become a four-star admiral.

We may see our first woman President in 2016, but if not then, no doubt soon after.

Which begs the question: Why are we still latent in acknowledging the best man for the job could well be, and often should be, a woman?

In business, "companies with more women in leadership posts simply perform better," notes Joanne Lipman, former editor-in-chief of Portfolio magazine in the WSJ . Fortune 500 firms with the most female board members outperform those with the lowest by 26% on return on invested capital and 16% on return in sales. Yet, the number of women at the top is barely budging."

Lipman offers some observations as a guide for men: A male magazine editor may declare "We need a piece on the drop in gas prices!" Some woman making the same point might ask, "Has anyone noticed that gas prices are falling? Do we know why?"  It's the question mark that takes ownership away.

Some women apologize more often, says Lipman, and might attribute a compliment to "Just lucky." She may not ask for a deserved raise. Some may feel wrongly that men don't respect her. Some may consider "I've got a great girl in shipping that is..." as a compliment. Tears are often viewed as a weakness. Some may need a maternity leave or step back in her career to raise children. Some may be viewed as a mother figure rather than a boss.

So who's fault is that?

Surprise! It's yours, you male pig. (I just said that to get your attention men.) OK, it's hers a little too. But if a decision-making man is truly worthy of a leadership role, he most likely recognizes skill, talent, viewpoint, introspection, leadership, potential, etc. without sexual bias. 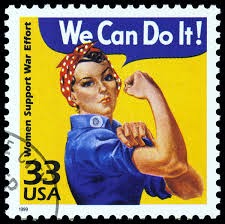 The world of yesterday was full of 'good old boy' networks and old ideas (like Miss America Pageants) that often still persist. Old stereotypes forget it was the women at home in World War II that allowed for victory to happen. Women have, sadly, not been appreciated anywhere near to what they may be able to contribute. We are equally good... or bad in every way except child bearing where they lead by a hundred miles.

Yes, we are better at appreciating quality regardless of sex or race, but we're really not there yet. And I do wish women, in their evolution, would stop using girl power or girl anything... sounds as bad as 'good old boys.' 'Women' is so much more powerful.

I guess I just had to get that off my chest.

For a good time, read Men are From Mars, Women Are from Venus by John Gray Page in 1992. Watch From Nine to Five with Dolly Parton, Jane Fonda and Lilly Tomlin dating back to 1980. Then go out and make the world a better place.