The day after in Charleston


I was here and it was sadder than you could imagine.

As we drove by the church last week--by accident actually--we saw the media frenzy. It was just the morning after and they flooded the street along with their satellite equipped trucks reaching to the sky. In that block, we saw four separate interviews being conducted and several more talking heads reporting to their viewers.

This was just before the street was closed and the flowers and tributes began to accumulate. The enormity of the sadness was settling in and the disbelief that someone could do such a thing prevailed. But the sadness...

Our group, HOPE Animal Assisted Crisis Response, was in town for its annual meeting. There were about 50 members and 30 HOPE working dogs present. HOPE has 300+/- dog/handler teams and team leaders nationwide, all donating their effort and dollars to help make a difference.

We do this stuff... bring comfort and solace to those in great need. We are not first responders but come in later when appropriate--maybe memorial tributes, candle light marches across bridges, at gatherings after the tragedy, when classes convene after a shooting. We have been at the Osa mudslides, DC Navy Yard for weeks after the shootings there--at the request of the Navy, hurricane Katrina and more, the Houston floods and tornado relief missions, the forest fires in the West--time and again, annually at TAPS--Tragedy Assistance Program for Survivors of the military fallen... you get the 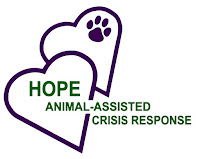 On Monday evening, we deployed six HOPE dog/handler teams at the request of the FBI to be with the people on the memorial candlelight walk across the bridge. We were there Tuesday and Wednesday working with the Mental Health agency to be available. There may be more as recovery is ongoing.

The media has praised the people of Charleston for the overwhelming response to try to make something positive come from this tragedy with the hope of starting a meaningful dialog on race in America. We have come a long way but are still far from the finish line.

Comedian Chris Rock used to tell a joke about racial hardship. "Do you know how hard it is to be black in America?" he would ask his audience. "I'll tell you how hard. There's not a single white person in the audience who would trade places with me. And I'm rich!"

The alleged shooter, just 21 and filled with hate, killed nine of our best, kindest, hard working and noblest people... and as a sardonic reward, we get him as the only one left. It's not right. It's not fair.

John Stewart said it most poignantly here. It's just a few minutes... and it's worth it to get a rich perspective.

Now there is a broad movement by politicians and major retailers to take the Confederate flag down from public adoration and relegate it to museum status where it has a place. Will it happen? We'll see. 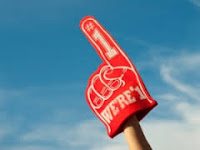 *One recent study estimates the United States has a gun ownership of 89 guns per 100 people--but only one third of households own them all. So we're number 1... big time.

We also lead in shooting tragedies like Sandy Hook, Aurora, Charleston, the Amish school shootings, Columbine, Virginia Tech (Google 'school shootings' and you will be taken aback)... the list goes on. And we have a huge lead in people killed by guns, both in numbers and by a percentage of population.

We're either good at the wrong things or not trying hard enough at the right ones.

Like it or not, we have a gun culture, but wouldn't you think we could manage it better? After Sandy Hook, when many pushed for background checks on all who want to buy guns, and the elimination of large capacity magazines to use in firearms that can fire a lot in a brief period of time, we got instead a push for open carry and looser restrictions. I am still amazed at the photo that ran nationwide showing several people shopping at Target with loaded rifles strapped to their backs, just because they can.

The NRA is a VERY STRONG organization that lobbies effectively and makes or breaks politicians by promoting or withholding endorsements. If two of three households are not gun owners, how come the smaller percentage controls the game? Do you hear us Congress? Congress? CONGRESS?

Any positive action we take will not be solely definitive... but it will be a start.

I do know one thing to be true... none of this will change any closed mind.


*Figures shown are estimates based on credible studies. These statistics reflect order of magnitude, plus or minus.