A few things that just came together to start the new year. Happy 2016 to all! May it be miraculous. 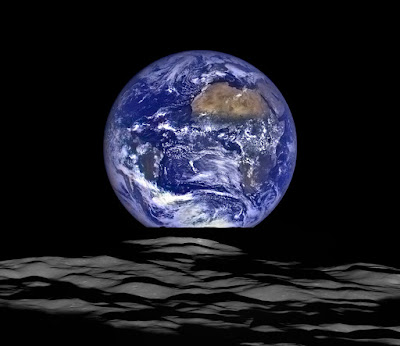 Though you can barely see it in this photo of Earth, that's me... standing on the corner of 38 degrees north latitude, 77 degrees west. I'm the one standing next to Jerry Seinfeld just before he leaves to pick up President Obama (really) for Comedians in Cars Getting Coffee. He asked me to go but as you know, a 1963 Corvette Stingray just doesn't have that much leg room. The photo incidentally, was snapped by NASA's Lunar Reconnaissance Orbiter as it cleared the moon. It's a little out of focus because someone moved. 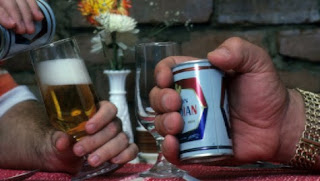 Elsewhere in the world, that's Andre the Giant (right) having a beer. Yep, he was a pretty big guy... and a really gentle, nice man. I wrote about him and other big men here. Andre was 7 feet, 4 inches and weighed 540 lbs.

After a pro wrestling career in which he was always the good guy against every dirty wrestlin' villain while never loosing a match, he played a great role in one of my very favorite movies, The Princess Bride. Sadly, he died young (age 46) as he always knew he would. "The big and the small, they don't live very long."

He retired in seclusion to his farm in Ellerbe, NC where he was beloved and everyone "had his back." I ate once at his favorite restaurant, Little Bo's Steak House in the out-of-the-way backwoods of this small town which GPS couldn't find... but the locals knew.  I had a chance to sit in his special chair, which would have held several more of me. Story is, he could eat and drink any five men under the table and still be as sober as the day he was born.

Another pretty impressive man died just recently. Meadowlark Lemon (84) was the Clown Prince of  basketball. For 24 years, he toured the world as one of the best for the Harlem Globetrotters. With Lemon and others on the talented team, the Globetrotters won 8,829 games in a row, a streak that was broken by the New Jersey Reds, 100-99. (Backstory: Lemon missed the winning layup in the last seconds and the team was devastated.) While many of their victories were played for laughs, they were an incredibly talented team, once stunning the world with a win over the NBA's powerhouse, the champion Minneapolis Lakers (later the LA Lakers), 61-59.

The Globetrotters entertained millions of fans across the globe on courts from aircraft carriers to desert sands and followers from Pope Pius XII to Nikita Krueshev, they still enthrall us. And, not insignificantly, they are largely credited for integrating the NBA, which would be nowhere today if it weren't for African American talent.

NEW YEAR'S BLESSINGS AND GOOD FORTUNE TO ALL!