BOOTS ON THE HIGHWAY: The end of a three-decade odyseey of the mind

About 30 years ago, my wife and I decided we wanted as much good health as we could control so we enrolled in a local fitness club vowing to stick it out forever... or at least a month. That's how it--this journey to alter the future--began.

So why all the boots, you might ask. (Oh, you haven't seen all of them yet.) Well, here's how that came about.

We knew that the only part of our busy day we could control was the early morning. Once our work day began, so did the excuses. We began going to "the club" at 6 am three-days a week. It was winter and it was HELL!

But we did it, starting with a 10-lap walk around an indoor track. Every lap took us past the opening to the early morning high-velocity aerobics class. We'd shake our heads and wonder how crazy you'd have to be to do that three times a week as we worked up a sweat to finish our mile.

But after a few weeks of boring walking, we thought we'd try the class, from the back row, to see if we could stay up. But to our surprise, the group... maybe 20 or so... welcomed us as if more of a crowd would make hell seem easier. To our surprise, it did.

Now here comes the boot part: Every Monday, Wednesday and Friday at 5:45 am, my wife and I. still in a sleep-deprived state, would drag ourselves into separate cars (since we had different work destinations) and try to believe this is what we should do as we drove to "the club."

For one two-week stretch, we would separately pass a lost boot laying near one of our intersections. It was still there, weeks past when it should have been, littering the street corner where we turned.

"Did you see the boot? It's still there."

"I know! Somebody must be walking around with one cold foot in all this snow."

Then, one early cold morning, my wife noticed, "The boot is gone! I almost miss it."

Secret: I preceded her that morning and grabbed the boot. Then that night, without her noticing, I put in on the hood of her car.

The next morning we laughed and tossed the boot near the garbage can til next pick-up day. But fate intervened and that day she saw another lost or discarded boot on the road she traveled. Of course, she stopped and grabbed it for my car hood next day. "Isn't that odd? Two boots in two days. Bet that means good luck."

A few days later I found number three and we immediately bought a lottery ticket. Then, we couldn't believe our luck when we just missed the grand prize by only five numbers. "Imagine, if the 6 would have been a 3 and the 4 was 7 and the 2 was one place to the left instead of the 8, we would be millionaires!"

We just couldn't throw those good-luck omens away... and so it began.

It's really amazing what you see on the side of the road if you're paying attention, and we always were. It was a game and when we scored, we always we always knew it meant something because we pretended it did.

"Oops, guess this means we have to go to Paparazzi's tonight."
"That's for your birthday."
"This means we'll sell the car today."
"I see a trip in our future."

And the more serious:

"It's a prayer for Aunt Nancy to get better."
"For the new grandchild to be healthy."
"That Jim will get that job."

It was always something... and as the the boots started piling up, we got inventive as to how they should be displayed. We even took them with us when we moved. And yes, we were the talk of the neighborhood--'those crazy people' I think they said.

Our kids and friends added to our cache with an occasional find. We have boots from many states and several foreign countries. Furthest came back in luggage from Italy. It meant we would eat great pasta for the rest of our lives! 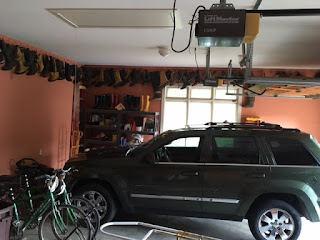 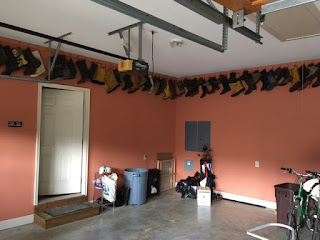 So when we repainted, all 126 boots (yep, really)  had to come down. The total could have been much larger but some boots on the highway were just not safely retrieved. And believe me, it hurt to have to pass up a great boot. However, we did have a few daring trophies. One was in a busy tunnel on I-5 in Seattle... it was a firefighter's boot--a real treasure--that my daughter and I scouted first then grabbed at 3 am with virtually no traffic to worry about. She drove and I grabbed... took about 5 seconds. See if you can find it in the photo at the top of the post.

Sadly, it was time to take them all down. Most had  deteriorated so it wasn't emotionally difficult to do, then take to the dump for a proper burial among the trash. The fun memories however, and the spirit of the chase will always be savored. Doesn't mean we won't still pick up a stray for old time's sake, but since we didn't win the lottery, I blame the bad boots... oh, and the fact that we never did actually buy a ticket. So it's our fault after all. 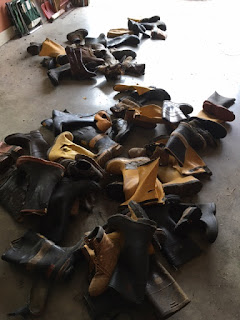 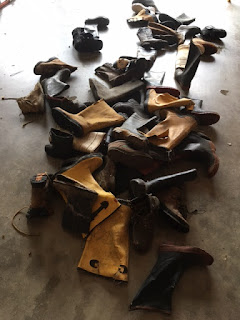 Goodbye boots. I guess I'll just keep on driving and watching for the ones that got away.

Ed Note: We were regular participants in hat high energy exercise class for almost 20 years... a class that had only four instructors in all that time and was filled with very sweaty--and warm, dear friends who knew each other by first name and any number of personal tales we shared. We attended weddings and a few funerals of those early morning maniacs--many of which we wouldn't recognize on the street with their clothes on--and shared joys and sorrow. It was one of the fullest, longest relationships that had the benefit of better health. We blame every one of them for those boots and great memories. (Special hellos to Del R. and Jim T.)