I have a friend who takes his own EKG... and showed the way to an out-of-the-box solution to our health care conundrum. 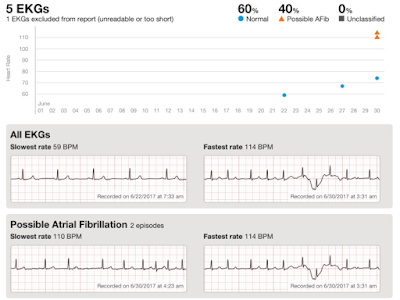 This is his actual EKG... he took it himself and sent it to his doctor.

He has atrial fibrillation (A-fib), an abnormal heart rhythm characterized by rapid and irregular beating. A-fib is associated with an increased risk of heart failure and stroke. Fortunately, it can be monitored and managed.

His onsets are usually sporadic rather than constant, with some episodes lasting just minutes. But they can and have continued longer, occasionally triggering action.  Without an EKG at the time of an event, there will be no record to build a technical history. So the ability to record an event as it happens is an enormous benefit to good health. (Note: the doctor suggested this process viewing the readings as credible.)

Even if your doctor could record your EKG at the moment it is happening, that procedure would cost significantly for each event, without even considering your need for an appointment and waiting a schedule.

So my friend, and many like him, are turning to an app on their smartphones to do the job. Yes, believe it. This app (with interface) that took these reading cost $99 because a device interface that records the EKG input is necessary. The reading appears on your phone and may be emailed to your doctor in minutes. There are other apps available free that require no interface (your finger over the camera eye) but his app, AliveCor by Kardia, seemed the better choice. His device is mounted on the back of his  iPhone cover and is always with him. How convenient is that?

This blog however is NOT about my friend's A-fib resolve but what this growing technology allows for in other applications. It is seen by some as the 'out-of-the-box' solution to a better way of harnessing the octopus that is affordable health care for the masses. Best of all, it has a simple-to-understand logic which, in today's world of political victory at any cost, could be read as it's death knell.

Dr. Eric Topol, a cardiologist and professor of molecular medicine at the Scripps Research Institute, says in a WSJournal essay, "Our health-care system won't be fixed by insurance reform. To contain costs and improve results, we need to move aggressively to adopt the tools of information-age medicine." He calls that, "The Smart-Medicine Solution to the Health-Care Crisis."

"No matter how the debate in Washington plays out... we will still be stuck with astronomical and ever-rising health care costs." Projections by the federal Centers for Medicare and Medicaid Services show that health spending in the U.S. will grow at a rate of 5.8% a year through 2025, far outpacing GDP growth.

"Our health care system is uniquely inefficient and wasteful," Topol says. "The more than $3 trillion that we spend each year yields relatively poor health outcomes, compared with other developed countries that spend far less."

While he acknowledges that containing costs and improving care is accepted and necessary, it is what we, the patients can now do to greatly help in both areas. "In my three decades as a doctor," Topol says, "I have never seen such an acceleration of new technology, both hardware and software, across every dimension of medical practice. The new tools are not just more powerful, precise and convenient, they are more economical, driven by the information revolution's ability to deliver."

Now, heart and blood pressure readings can be credibly delivered regularly, if necessary, by the patient him/herself. "The Food and Drug Administration has already approved wearable sensors that can continuously monitor all vital signs: blood pressure, heart rate and rhythm, body temperature, breathing rate and oxygen concentration in the blood, for a fraction of the cost for a day in the hospital."

"We now have ultrasound probes that connect with a smartphone an provide exquisite resolution'" he says, "comparable to hospital lab machines. It is possible to examine any part of the body (except the brain) simply by connecting the probe to the base of a smartphone and putting a little gel on the probe's tip. When I first got a smartphone ultrasound probe last year, I did a head-to-toe 'medical selfie,' imaging everything from my sinuses  and thyroid to my heart, lungs, liver, gallbladder, aorta and left foot."

And his reading showed a kidney abnormality, he was subsequently diagnosed with a kidney stone confirmed by a doctor's CT scan.

Conclusion: Imagine how this could work to reduce hospital stays and any subsequent hospital-driven complication that, statistically, happens 25% of the time. This ties into so many other areas to improve health care at what could amount to significant savings in time, efficiency, diagnosing insight and stress. A person's genome sequencing--identifying all three billion genes--can now be done for about $1,000 and leading to smart alerts and early monitoring.

Whoa! What have we got here... a technical breakthrough on a level of discovery of a cure for cancer or... who knows.

If affordable health care is seen as a Rubik's Cube of variable options, then to take this path could well be the key to the puzzle that, before now, hasn't been in the picture. Are we on the cusp of another Wright brothers-like event?

Yes, it will be hell to go from here to there as technology evolves and this becomes the political football with lobbyists, the insurance and health industries, political detractors, patients themselves and at every turn, for every reason. But couldn't a President (whoever that is, now or soon) do a "Kennedy?"

On May 25, 1961, after the Russians had put the first man into space, leaving us greatly embarrassed and deeply concerned about being beaten into this future frontier, John F. Kennedy proclaimed to a special session of Congress and the American people, the goal of sending an American to the moon before the end of the decade. 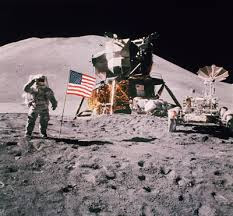 On July 20, 1969, Apollo commander Neil Armstrong stepped off the Lunar Module's ladder onto the Moon's surface... a moment of great national pride.

If we can do that, couldn't we do this, to the great benefit of all Americans? Come on Donald, or whoever, say something.