A tribute to the Cassini-Huygens space craft that pulled a Butch Cassidy and the Sundance Kid ending after a brilliant 20-years hanging around Saturn... but first, a quick look at Jupiter that should make us humble 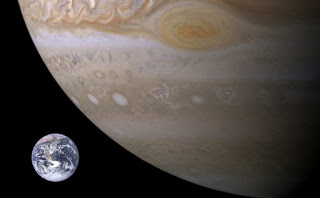 So this is Jupiter, our largest planet... and that's little teensy weensy us in comparison.

But this isn't about Jupiter... it's just that this image is so dramatic that I had to use it. This post is really about our second largest planet, Saturn, the one with the rings, and the reminiscent finish--like in Butch
Cassidy and the Sundance Kid--of the Cassini-Huygens space craft which took a two-part dive into history on the surface of the planet and its largest moon.

After 20 years of sending information on Saturn and its rings, (made up mostly of water ice and some rocky particles) the Cassini-Huygens will separate and crash majestically into Titan, its largest of 150 moons and the surface of the planet itself.

That's one of NASA's thousands of Cassini pictures that was sent back to earth. (Just think how much more fun it would have been as an emoji if it was taken with the new iPhone 8.) A few facts: