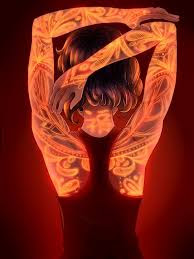 Three in ten do tattoo. Surprised?

Now that's where it becomes interesting, especially to one who doesn't... tattoo, that is.

I have just come from the opening of A Living Canvas, at a North Carolina art gallery. Knew it would be worth my time but I was blown away by the beauty and grace that I saw and the deep meaning of personal art. Some of my friends and at least one of my family are tattooed, but I never gave it much thought. This beautifully photographed opening showing individuals with their messages and some of the models themselves helped me understand the 'why.'

"Tattoos have been a part of American culture since the mid-1800s and in other parts of the world for centuries," says the story. "Body art has been a symbol of rebellion and taboo, making it a misunderstood medium. More and more, tattoos are becoming mainstream, from fashion accessories--for both men and women--to poignant personal statements."

That's what this exhibit is all about.

A man with a battle tank on his forearm pays tribute to his most emotional memory and the tank that saved his life in Iran. One couple chose their joint family crest with the thought "If you don't risk, you don't gain," into their marriage, expressing that love is a risk taken for a lifetime of adventure.

A woman has an angel wing tattoo on her arm as a reminder and tribute to the life she saved when she came upon an automobile accident. Another wears a design as a memorial to the son she lost. Then there was a woman with a tattoo in memory the  of her child that was lost and in thanksgiving for the blessing of a child just born.

Some are adorned with carefully chosen designs that represent milestones in their lives, another s for adventures taken. Some choose carefully for the design and beauty they see around them. And that itself is a tribute to the artistry that goes into most work.

Many who tattoo seem to be military, perhaps because the gallery is near a military base busy with so many deployments and multiple deployments over the past years. Tattooing seems to be as much an emotional expression as rebellion or less noble reasons, but that's life.

There is good and bad in everything as there is in tattooing itself. Tattoos were used to mark the Jews in Hitler's time and earlier than that, on slaves and in other evil ways. Today, street gangs use tattoos as identification.

There are those who look at a tattoo on anyone as something of a disfigurement that lasts a lifetime. Well, we all have our foibles but to deny those who tattoo their right, privilege and earned respect is to say they are wrong and we are right. Some tattoo modestly... perhaps a simple rose or the words "Peace" or "love," and some use much or most of their body.

We all have personal tastes because, thankfully, we can. The world is a beautiful place from every different set of eyes and beauty is where you find it.
Posted by Jerry C at 11:27 AM

Email ThisBlogThis!Share to TwitterShare to FacebookShare to Pinterest
Labels: Tattoo