A QUIZ: Who has the best selling album in history and which Golden Record is a cinch to beat it by a million miles if only... ? 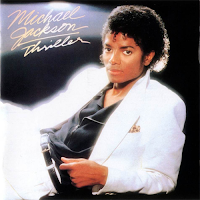 No, it's not him, though I can't imagine why not.

I can tell you though, the upstart that will ultimately out-distant eveything ever recorded and is filled with "Golden Oldies" and has a lock on a vast, untapped market that is guaranteed to 'rock your socks!'

Hint: It features Johnny B. Goode (as in Back to the Future), written and performed by Chuck Berry. And that is ironic, as it is in the future that this will/might break all records by a million miles, literally.

Got it yet? Of course, it is NASA's Golden Record... the two-disk album  aboard spacecrafts Voyager 1 and Voyager 2, rocketing as we talk (read) out of our solar system into unknown space to possibly reach another civilization in perhaps, several billion light years or so. And word of mouth in the record industry is that these people... er, aliens, are really hip and buy records like crazy. Besides, that is where Michael Jackson may now be living... I mean dead... er, living dead.

But wait! Buy this record and get free, greetings in every known language on earth (really). And That's not all! If you buy now, you also get 115 classic images that show how we live on this planet. Order in just two billion light years, and we'll also give you the all the sounds of earth... jackhammers, musical instruments, farts... no not farts, and more. If you are an alien and haven't yet invented a record player? We'll throw that in absolutely free!

And, folks on earth, you too can get in on this great deal. Those golden discs have been reproduced in human scale (CD-ROM) so you can buy your set (really) on Amazon (of course) and a number of other places. Also available in many public libraries (really again).

"The spacecraft will be encountered and the record played only if there are advanced spacefaring civilizations in interstellar space." Carl Sagan (also dead)


PS: The Beatles actually sold the most earth copies... but you just wait!