Yes, it is proven, you absolutely CAN BUY HAPPINESS... and here's how. 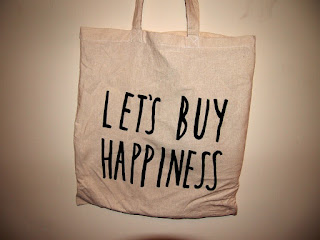 You can, you really can buy happi-
ness.

There are no tricks or gimmicks. It can cost nothing or almost nothing--that's up to you. And best yet, it has a positive spin that goes beyond just you.

Behavioral scientists have discovered though, that money isn't the currency... dollars may lead to a lessening of sadness, but happiness is not materially for sale.

There is a history of lottery winners showing, for many, a loss of friends, social placement, extravagance and ruin that a sudden infusion of millions of dollars can cause, because winning the lottery is everything material. (I'd still like to take my chances though, but the catch--you have to buy a ticket.)

The quality of close relationships with family and friends, the blessing of health and satisfying work or hobbies are the big deals for happiness and they come with no tariff. It is the small, day-to-day stuff that can benefit a disposition on the spot, no matter where you are on your 'happiness scale.' It's like a no-cal piece of chocolate or slice of pie alamode if that's your thing. THAT happiness, you can buy... if you know how.

Michael Norton, a professor of  Business Administration at Harvard Business School, has found a real-life way to buy happiness with positive results. Here he is on TEDTalks . If you have 10 minutes, It is worth your time.

For you busy folks, here's what he showed:

Doing studies in a number of venues, from Vancouver to third world Africa, and in different ways, he basically asked random people how happy they were at that moment, expressed in a number from 1 to 10. Many said  6, 7 or 8. Then he gave each participant an envelope containing anywhere from $5 to $50. Each envelope asked the recipient to use the money that day. Some were told the money was theirs to keep, no strings attached. Some were told they must use the money benevolently on someone else, and some were given a choice to keep the money or give it away.

Of those who kept the money, they typically just put in in their pocket or purse, bought a Starbucks coffee or just used it as part their cash. Those who were told to give it away gave it to street entertainers, someone they saw seemingly needy or benevolently in any other way.

Moreover, Norton wondered what would happen if he gave dollars, under the same circumstances, to a basketball or dodge ball team (which he actually did) or an office sales staff or to some other like group. You really have to watch his talk for the full effect, but in virtually every case, the benevolent recipients' use of the gift (donuts for the office, new sweat bands for the team, for example) performed better... universally. The sales team sold more that its test counterpart that kept the cash, the benevolent teams dramatically improved their records, etc.

Personally, I once stood behind a young father ordering breakfast for his family at McDonald's. When he heard his order would cost $18.75, he told the cashier that he had left his wallet in the car and had to go get it. I watched him go outside to his wife and small children waiting for breakfast. He got into the car and had a moment's conversation with his wife. He  shrugged his shoulders and shook his head, then drove off. I realized he didn't have the cash. I was sadly so sorry I didn't recognize the need and pay for his food that my happiness scale dipped two numbers. Opportunity to buy happiness missed. I hurt for a while after that.

It is dramatic what spending money for someone's benefit or need can do for your personal happiness. And it really is that easy. It IS BETTER to give than receive and that happiness plays out in simple or complex ways to the recipients as well as the donors. 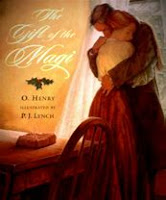 Try it yourself. Give someone you perceive may need a lift, a few bucks and watch what happens to the recipient... and see what it feels like to you. It's such a easy gesture to be--in ways big or small--benevolent.  And, as Norton's experiments showed, it doesn't take much to make a difference. It pays dividends in life. And really, don't we always need more things that make us feel good?

Is there a richer story to that point than O. Henry's The Gift of the Magi, a worthy read in any season?