YOU MAY ALREADY BE A WIENER! 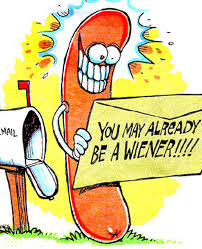 Were you one of those who stood in line for over 3 hours at some locations just to buy a ticket or two? Hope it was worth it.

Odds are 1 in 300 million (or about one of the people in the United States) to win. Great odds... and somebody has to win, right? Wrong actually, because no one has won this lottery since last summer... that's how it got so lucrative... and so impossible.

Odds of winning both of these jackpots is 1 in 88 quadrillion (population of earth 293333333 times, but good luck.

Actually, here's my point. If you stood in line for up to 3 hours or more for the opportunity to buy one or more tickets at $2 a pop, would you stand in line for 3 hours to vote this November? Probably most in the lottery line would not, but that's just my guess. Less than half of us vote in almost any election and this is one of the most important.

However, where there is the will, there is a statistical possibility it could be you. Here's my favorite scene from one of my favorite movies, Dumb and Dumber with Jim Carey and Dave Daniels on how hope and a positive attitude actually keep you in play. Odds, schmads, you can do it.

BUT CAN YOU... AND WILL YOU VOTE THIS NOVEMBER? JUST DO IT AND KEEP OUR HOPES UP THAT WE, AS A PEOPLE, WIN!