Where is Jiminy Cricket, our one time national conscience, when we need him most: A dedication to every woman, man or child who has ever been abused in any way. 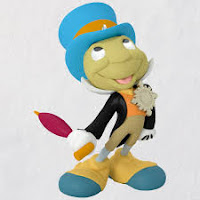 This is an interesting story. Jiminy, which is his real-fake first name, sould become a symbol, with a more personal message so appropriate today.

Jiminy first appeared in Carlo Colodi's 1883 children's book, The Adventures of Pinocchio, from which Walt Disney's Pinocchio was born in 1940, and he co-starred with "you know who." He is Pinocchio's friend and conscience, as appointed by The Blue Fairy after she has given Geppetto's puppet life. Jiminy narrates the story, sings,some songs, mentors and guides, clicks his heels and most importantly, whistles. He is admirable. He could/should be President.

And when Pinocchio lied, his nose grew longer and longer so everyone knew he was lying. I've noticed a a lot of long noses lately.

Jiminy's name came from an old, polite euphemism for Jesus Christ, spoken earlier in film by of the dwarfs in Snow White and the Seven Dwarfs. So '"Jiminy Cricket!," can't we all be better than that?

And you can't convince me Australia's Crikey! wasn't just another derivation of the same expression.

But mostly, Jiminy became an 'everybody conscience' as World War II was at our doorstep and the morality of Pinocchio was what we watched as right prevailed over wrong in a satisfying, tearful way.

Here are the memorable songs in the movie (if you're old enough to remember):
All the songs are listenable if you Google Pinocchio songs and they are fun, but I took Give A Little Whistle to heart:

Jiminy Cricket, can't we be better than we are?