Ode to a Stick Shift (with a very special treat at the end: "BEEP, BEEP... the Little Nash Rambler" by the Playmates, which explaines it all.)

When I was just 16 and not very good at this thing called "DRIVING," I did something so stupidly remarkable that if truth were told (and it wasn't because I lied) it might make the Rules of the Road record books.

Many of us learned to drive a 'stick shift' because that's all there were at that time. All those cars had one extra pedal, the clutch,  and a button on the floor to 'high beam' or 'dim' our headlights..The emergency brake was your special friend because it helped 'hold' the can on a hill lest you roll backwards before the forward gear engaged.

Drivers had to use two hands and two feet in a syncopated rhythm to mesh the gears. Sure it was a lot busier with a manual transmission... and a lot more fun. You were actually driving instead of just steering. More sophisticated manual manual transmission cars are still sold but fewer each year and some auto companies no longer offer them. You felt more control of your car... because you were.  And if you did it wrong and found yourself stuck in an intersection or at a red light that just turned green, other cars would honk (politely, of course) and holler "Get the *&%$ out of the way, you jerk. Learn to drive, why dontcha!"

Now for my Rules of the Road record: Picture me, just a few days past my 16th birthday with my driver's license newly in my pocket and all the confidence that I WAS the best driver in the world. But some things they just don't teach in Driver's Ed., like how to navigate the notoriously steep Western Street hill with a stoplight at the top.The trick was to wait at he bottom until the light turned green... then GUN IT and pray to NEVER get stuck atop Western Street. MOST knew what I had yet to learn.

So when I got stopped by a cement truck that failed to make the light, I knew I was in trouble. I was stuck, with that monster truck just in front of me and another car close on my tail, all of us stopped on WESTERN HILL waiting for the light to change. I thought fast as I felt sweat rolling down my neck.

I knew that as soon as that light turned green, the monster truck in front would roll back just a few inches as the professional  driver would do the clutch/brake thing smoothly and he would move slowly forward. I just knew that I had to execute perfectly or kill the engine... or worse, roll into the car behind me. 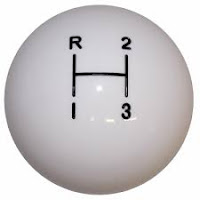 I determined (wrongly) that my car should be in second gear since that was more powerful.  So I put my stick shift into second gear, or so I thought. But since second was just across the gear shift from reverse, which I unknowingly found.
than first,

The light changed and I just gunned the heck out of it... and I did it perfectly--except that since my car was in reverse, I sped down the hill at record pace, solidly hitting the car behind me with as much force as my anxious foot would allow.

Now let me just say that no one was more surprised than me... although I think the person in the car I slammed into might also have raised an eyebrow or two. It was as awful as it was loud and for a moment, time stood still. It felt like this to me.. but thankfully, it was not.

Making certain the lady in the car I had hit wasn't dead--and thankfully, she wasn't even hurt--I heard the siren and knew my time had come.  In a  falsetto voice, I said "Hi officer.. " giving a modest Stan Laurel wave.

He asked in a decidedly not falsetto voice, "What in God's name happened here?"

I have often been told that I don't know what I am going to say until I hear it said from my mouth, This was one of those times.

"Officer Sir, there was a huge cement truck in front of me and when the light changed, it started to roll backward, toward my car. I really felt that to save myself, I had to back down the hill as fast as I could."

"You certainly did a good job of that" he told me. The blessing, of course, was that no one was hurt and to my great surprise, the officer said, "Well that's one for the record books (see, I told you) "It happens kid. and that's why you get the ticket." The lady in the car behind... the one I hit, gave me a hug and said "Cars can be fixed."

That's it. No ambulance, no handcuffs, kind people. And the cop had a good one to tell the guys at the station. The lady, God bless her, worried more about me than her car. Even my dad and mom understood... sort of. I had to pay the ticket and was cautioned to learn from the experience. I did.

Now you ask, how could I ever be so naive as to think second gear was 'the power gear?' Well, if you've read this far, then you get the treat of watching and listening to a real top 20 classic of the time, "BEEP BEEP. The Little Nash Rambler" by The Playmates, And be sure to catch the last line... my stupid excuse.

Moral of the story: Never go up Western Street Hill unless you are prepared for the consequences.
Posted by Jerry C at 11:47 AM