Some people have bedbugs. We have hummingbirds... and darned lucky at that! 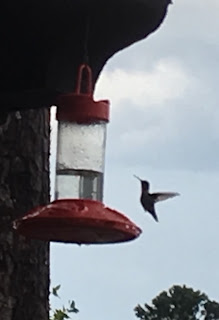 Ever seen anything so fascinating as a hummingbird... or better yet, four hummingbirds?

They come to our feeder because we have a 4-hummingbird rating on Yelp, and they put on quite a show.

Our feeder (in red, their favorite color) has had the same bird returning now for the third year, and this time, with three others. We know it is a 'he' because of the ferocious manner in guarding his never-ending food, four parts water, one  part sugar. Only 'hes' do that unless there are more users than he can defend against. When others try to feed here, he attacks like the Red Baron in the Snoopy comic, and, say the birders, sometimes actually stabs with his pointed beak.

There are dozens of 'dog fights' at times... and they really do look like dog fights.

Hummingbirds flap their tiny wings up to 100 beats per second and can remain stationary in flight as well as fly backwards as they dive and dart at amazing speed. Yet, when they are feeding, their beating wings steady them over the flower or feeder while their beak remains rock-steady.

They are the only bird that cannot walk. The smallest of the species weighs less than a dime but our

birds weigh in at about a nickel. They come in a wide variety of colors and habits, each seemingly more beautiful than the other. And they are loners for the most part, forever active in their pursuit of food. Their energy level and rapid heartbeat uses calories so rapidly that in a day, they will digest their weight in nectar and sugar water if available. If not for feeders, flowers are the bigger source, mostly red flowers but all bright colors will work.

In their constant dashes around the feeder, they often encroach on our deck by a yard or two, even when we are present. And occasionally, they will stop mid-air at a distance of three feet  or so and give us a look. Yes, it takes a little getting used to. Their wings make a whirring sound though they do have a tiny voice that is occasionally heard if you have good ears. And they excrete in a 'not even noticeable' squirt that disappears in the air before it becomes problematic. With three dogs, that would be the straw that broke the camel's back. And where would we get those tiny sacks anyway?

Amazingly, these little things migrate when the weather turns cold. Ours, fly to southern Mexico at up to 500 miles non-stop at a time. They use the wind if they can and will even ride on the back of other migrating birds along the way. They most often migrate alone. Hummingbirds can, lab tests show, fly and feed into a 20 mph headwind, their tail feathers fanning and positioning with the wind to keep them in place while their rock-steady beak feeds.Their maximum speed is 30 mpg but they have been clocked at a speeding ticket 60 in a dive, so you can imagine how fast they can pursue.

They remember and often return to the same spot in the spring. They can live up to four years but two is seen as average because their lives are so arduous. When mating, the female typically lays two very tiny eggs that hatch a week apart, so she can supply enough food for both 'til the fledglings leave the small nest. And typically, the mother gets a free pass to any territorial father's realm.

Now contrast that with the world's largest bird, the royal albatross, with a wingspan greater than 11 feet.

Or the long extinct Pelagornis Sandersi, the original 'Big Bird,' with a 24-feet wingspan, bigger than some of today's small aircraft.

Or Rufus the Hawk who plays a crucial role at Wimbledon. It is Rufus's job to keep the pigeons away, lest something distracting plops on a player's forehead at mid-serve.

Email ThisBlogThis!Share to TwitterShare to FacebookShare to Pinterest
Labels: Hummingbirds