The day I fixed something

We all remember where we were when we heard first reports on 9/11. We remember our first kiss, the moment we proposed to our spouse, the birth of our children, everything special to us... we remember. Well, chalk up another for me.

I will always remember today... the day I fixed something. No, I really did. Honest.

I've been known to be... er, a little unmechanical. I know there is something under that hood in front of the car but I'll be darned if I know what it is. I think it is a big on/off switch that makes the car go, or something like that. I have the perfect tool when an appliance breaks. It is called a telephone.

Sure, I'm handy with my more conventional tools. I do own two of them... a screwdriver that has a reversible tip so I have can do two kinds of screws, a straight one and one that looks like an asterisk... and a squeezer-thing that also serves as my nail pounder. I have a friend who has over 1,000 tools. Are there really 1,000 things to do with them?

But today... ah, today, I am a fixer person. When I checked out 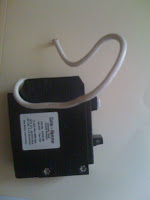 our small RV for an upcoming trip, I noted that the outlets did not work... or at least, when I plugged something in, it did not go. So I called the RV factory and reported this. The guy there, thinking I was someone of fixer talent, told me to check the circuit breaker. "The WHAT?" He directed me to a picture in our manual. See? That's what it looked like. I didn't know what it did... however, that didn't matter.

The problem was, he told me after having me perform a few tests (is standing on one's head with a finger in one's ear a regular circuit breaker test or not?), the circuit breaker was broken... it didn't break circuits. I guess it is not broken if it breaks other things. (I'm thinking, who's kidding who?) So he told me how to take it out and where to go buy a new one for only $38 dollars. Now I know it's a joke... but I did it anyhow.

Then, AFTER TURNING OFF THE POWER, he warned me... guess he didn't want an electrocution on his conscience... pull the old one out and put the new one in... being extra cautious to connect all the wires on the new one just like they were on the old one, even though sorting out a plate of spaghetti would have been easier.

Skeptically, I did this, thinking they are all having a good laugh at the RV factory. It took only seven hours... then I turned the power on again and plugged the toaster in. IT WORKED! I DID IT! I FIXED IT ALL BY MYSELF... with his insignificant help, of course.

When I ran home to tell my wife, she was justifiably proud of me... but said she really didn't want all that toast.

My fixer confidence is at an all-time high. So for my birthday, I want 998 more tools and a tool belt to hold them all, just in case I need to have them with me. I want safety goggles and steel toed shoes. I want a real worker-man's hard hat and a plaid shirt and jeans that show the crack of my butt when I bend over. I guess you could say I am hooked now that I know how easy this stuff is.

Note to other fixer-guys... your secret is out. What you do is nothing, do you hear...NOTHING. Next time something breaks, give me a call... I will be driving the truck that says on its side, Jerry, The Home Repair Guy... no job too big or small. And when I bend over, watch out... I'm smokin'.
Posted by Jerry C at 7:06 PM