A Cross to Bear 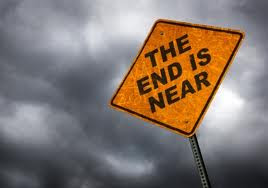 Bill shook his head in disbelief as he walked to his mid-Manhattan office. Should be a law about that. These guys just clutter up the sidewalk. Nutsos! All of ‘em.

The guy with the sign paid no attention to Bill. He saw hundreds of people like him every day. Sure, the sign could have been smaller but when your message is big, you gotta have a big sign.

“THE END OF THE WORLD IS COMING!”

John saw his only mission in life as spreading God’s word and making sure everyone was ready when they met their maker… not that everyone paid any attention to him… or that anyone paid any attention to him. Yet, John was undaunted. This is what God wanted from him… told him personally… and true to God’s word, John was ‘on the job’ every day. He was a ‘regular’... one of those street people that become vaguely familiar to the multitude that travel the same path most days.

You couldn’t say John’s clothes were rags, but then you wouldn’t say they weren’t. Looked like they were from the Goodwill men’s department… many years ago. It was his falling-apart sandals missing a strap, the untended beard that met his dirty hair half-way and the glassy-eyed look that said, ‘I do this for a living.’  Oh... and the sign, of course. But it was his rather distinctive ‘air’ that told the blind beggar down the block that John was at work.

Some days, John carried an old wooden cross. Thing towered about two-feet above his head and weighed almost half as much as John himself. Those were the days he wore his dirty white robe with the rope belt. Quite effective.

Those were the days that Bill, and everyone else, gave John wide berth.

“Saw that crazy ‘jesus guy’ again,” Bill told his wife that evening. “He was carrying the big cross today. God, he sure smells. Wonder what his story is.”

Two days later, Bill saw him once more, just as ‘the jesus guy’ fell while crossing the busy street.

As he put his arm under the self appointed ‘savior of the world’ to help him up, Bill shook his head. He couldn’t believe he instinctively ran to his aid. And if that wasn’t enough, he had to stop traffic to pick up the huge cross before it caused an accident.

“Thank you, my brother. Thank you. God sent you to me today and I am grateful.”

“Hate to tell you this, John, but you couldn’t be more wrong. There is no God. He only exists in your mind…. like Santa Claus.”

“How can you say that, man? God is the sun. The moon. The air. God is life in all its forms.” John, arms waving and sputtering as he talked, was just getting warmed up. As the crowd gathered, John knew this was the day… and the reason he was put on earth.

“Tell me, man,” he said, poking a finger in Bill’s chest. “Tell me who made you? Tell me which came first, the chicken or the egg? And where did either one of them come from? And the stars… and the universe...”

Bill couldn’t believe it. This bum had come alive. He was no wino with a hand out but a man on a mission. He took two steps backward for every one of John’s giant strides into his chest.

“How can you defend Santa Claus for your kids’ faith and joy and not give God the same courtesy? How can you smile at Christmas and get angry when I talk about God?”

John, sputtering on, was red in the face with fervor.  “What are you afraid of, man? Listen to your heart as your children listened to you. Is there a Santa Claus? Damned right! Is there a God? Damned if you are wrong. Don’t tell yourself nothin’ you don’t, deep down, believe just because you are afraid.”

Bill blinked and stared into John’s eyes. They weren’t crazy. They were begging for understanding…asking… pleading to be heard.

“Come on, man. I can see you get it. Admit it to yourself. Go with it. Take His hand and…and…and…”

John closed his eyes, took one staggering step backward… then slumped to the ground. His work was done.

The gathered audience seemed quietly stunned, unsure of what to do next.

“BREAK IT UP! Nothing to see here,” blared the voice from the bullhorn wielded by the officer in a black and white. And like that, the crowd backed away, watching as Bill knelt to John.

Bill didn’t sleep that night. He and his wife must have talked for hours before she fell asleep on the couch. Near morning, Bill stumbled into the shower, determined to see that John was taken care of…vowing to make sure he had a decent Christian burial.

“I saw that man a thousand times as a nut case…a homeless crazy,” he muttered to his wife as he walked toward the front door.  “In just five minutes, I knew a man that I should have known from the very beginning. I …. I… ,”  his voice trailed off.

“What is it Bill?” his wife hollered at his silence as she ran to him, now standing in the front yard, staring back in disbelief.

There, a large wooden cross…bigger, by far, than John’s, was leaning against the house.
Posted by Jerry C at 5:08 PM