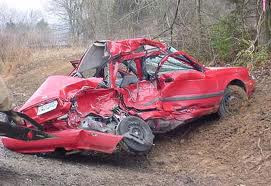 I saw a guy die once... actually, a guy, his girlfriend and a fetus. He was 'hot-dogging' and tried to pass a car--his sister's car-- on a hill.  I saw it all through my windshield as I was driving toward him up the other side, about 50 yards below the crest. With a ditch and wall on my right, I was 'frozen' in place. He was coming at me, head-on, at a police-estimated 70 mph. When he realized he had to do something, he sped up and took a violent right, over-correcting onto the shoulder. When he pulled left, trying to save it and have a great story to tell the guys at the shop, he lost a wheel and T-boned my vehicle.

His story died right there, just a few feet in front of me. Mine, blessedly, did not. Whole thing, start of finish, took 5 seconds, max. Death in the blink of an eye. 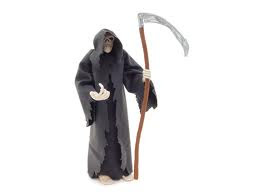 Now in the movies, it's a different story... especially if you are Jason Voorhees, Michael Myers, Freddy Krueger or Chucky. Yep, the super creeps of horror movies. (Wired magazine did the heavy research-- 41 originals and sequels in total.)


Jason, of Friday the 13th fame, drowns, takes a machete to the shoulder, an ax to the head and re-drowns (can you do that?). He falls into toxic waste, is stabbed with a mythical dagger and dragged to hell. You'd think that would do it... but NO! He is blown to pieces, stabbed with a fireplace poker and ejected into space. Dead? Don't bet on it. Latest sequel count, 11 plus the original.

Michael Meyers in Halloween is knitting-needled (Viola! A new verb, created by me) in the head, coat-hangered (Another! I'm on a roll) in the eye, is shot six times, falls two-stories, is shot five times, shot in both eyes, blown up, hit by a truck, thrown from a car, beaten with a pipe, stabbed with two knives, falls from a balcony, is thrown through a windshield, is pinned between an ambulance and a tree then decapitated with an axe... and if that isn't enough, he is impaled on spikes and stabbed in the face and chest. Whew! In the original and 10 sequels, dying is such hard work.

Freddy Krueger of Nightmare on Elm Street fame is burned alive, sledge-hammered in the stomach, burned again, ignored (Oh no! Not ignored.), is splashed by holy water (and doesn't make the sign-of-the-cross), is buried in sacred ground, torn apart by souls of victims released from the dead, pipe-bombed in the chest, trapped in a furnace, decapitated, had his hand-severed and has his throat slit. Shame... he was the chatty one. All this happened in the original movie and 13 sequels!

Chucky of Chucky fame, the darned cutest of them all, is burned in a fireplace, cuts off his own legs to escape being impaled, is covered in molten plastic, has his head blown up, his face cut with a scythe, is shot and chopped up in a fan. This in only the original and 4 sequels... which makes Chucky a mere rookie in the Crazed and Impossible to Kill Killers Hall of Fame. Can't wait to see the next sequel.

The bad guys never die easy, or at all. And the good die young... but of course, they are not great box office. So I guess it makes sense.
Posted by Jerry C at 10:43 AM