The richest of the rich: Just think of the good that could happen if this duo put their differences aside and stood together. Why, they could save the world! 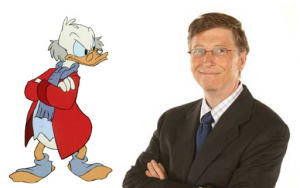 Thank you Forbes, for helping us settle an argument. Just who is the richest on the planet? 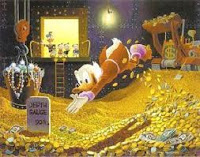 Forbes has long been know to keep tabs on the world's richest person, largest company, highest earning athlete, etc. But growing up, the one image that sticks with me is Scrooge McDuck rolling in all his gold coins, laughing at how he outsmarted the Beagle Boys (who are always scheming to steal his gold) again.

So if Scrooge is so rich, how does he compare to Bill Gates, USA's richest at $54 billion? Well, after calculating all his gold (measured scientifically by Forbes' "moneyologists"--depth of gold x area of arena-size vault--at today's soaring market prices), poor Scrooge only came up to $44 billion... a measly $10 billion shortfall.

OK... two "realities" here... Scrooge must have lost at least $10 billion in gold by playing with his money, swimming in it, running it through his webby fingers, etc. (Mom always told me not to play with my money or I might loose it. That's why I still use the old "wrap it in my handkerchief and pin it inside my pocket trick.") Or, maybe those Beagle Boys did siphon-off $10 bil. or so... one never knows. All I can tell you is that they drive a new car every year.

Viewed another way, picture all of Bill Gates' wealth in gold... the way Scrooge likes it... with Bill sitting on top of a pile that is 20 percent bigger than Scrooge's! Now that's impressive. (Also impressive is that Bill Gates and his wife Melinda have given nearly $25 billion to worthy causes everywhere in the world through their still growing foundation, which is incredible... and worth a look for your own information.)

So we have settled that. Bill Gates is worth more than Scrooge McDuck... and what Gates has benevolently given makes him more valued by far than any other billionaire, of which there are now 1,210. (Officially according to Forbes 2011 listings, Gates is the second richest man on earth... behind Mexico's Carlos Slim Helu by only a paltry $12 billion, give or take a few bucks.) 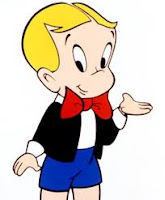 Other fictional billionaires that made this year's Forbes' list:
Dropping off the Fictional Billionaire's list from prior years: Jabba the Hutt, Thurston Howell III, Jed Clampett, Laura Croft, Willy Wonka, Cruella De Vil, Lex Luthor, "Daddy" Warbucks... and sadly, Santa Claus, who, with the price of toys increasing every year along with the growing population, is using all his resources just to keep the elves in food, clothing and shelter so they can continue to give hope to all the children of the world... God bless the elves for staying with him.

And, as I always say when I play my traditional role of Tiny Tim in our annual family Christmas recreation of Scrooge, the movie and stage play, "God bless us, one and all."
Posted by Jerry C at 11:45 AM