Sorry about the repeat, but it sets up a neat story about Jeff Bezos, founder of Amazon Books. Here's that story again... but better:

In the olden (pre-Google) days, a guy rushing for his train in Grand Central Station in NYC is running late. He stops a stoop-shouldered, bedraggled little man huffing and puffing as he struggles to carry two enormous suitcases.

"Hey friend," asks our commuter, "can you tell me what time it is?"

"Wow!" said the commuter who was literally stopped in his tracks. "Your watch told you all of that?"

"Oh," says the watch owner, "my watch will tell you anything you would ever want to know. Is Elvis alive? Is O.J. Simpson the real killer? When will the Cubs win the pennant? Anything, really.

"You can't," says the little man. "You see, I invented this watch and it knows EVERYTHING... but it is one of a kind and it is mine."

"But I'll give you anything for that watch," says the commuter.  "ANYTHING! I must have that watch."

After 5 minutes of intense haggling, the commuter convinces the watch inventor--with the help of $2 million dollars--to sell him the watch. Happily, he straps it on his wrist, says "Thank you so much," and starts to run in hopes of catching his train.

"Wait... WAIT," hollers the watchmaker, pointing to the enormous suitcases sitting on the floor, "Don't you want the batteries?"

See? It is better the second time... oh, sorry. 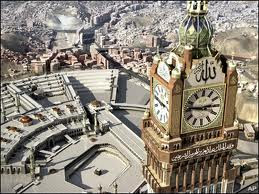 So how does that have anything to do with Jeff Bezos? Eerily, quit a lot. You see, Bezos is much more that Amazon, Zappos or on-line shopping. He has other stuff that has almost nothing to do with his $18.4 billion net worth (#26 on the Billionaire list, just ahead of Scrooge McDuck, I think).

One of those other ventures--the one that triggered this joke lead-in-- is Bezos' $42 million, 200-foot-tall, "10,000 Year Clock" that he is building deep inside a mountain on the property he owns in Texas, not far from his commercial rocket-launch site. (Yeah, really.)

And it is, as so many things in life are, eerie. A joke that is perhaps 50-years-old becomes real-life in another time... another era. Nothing disappears, it just regenerates in a different form. While this sounds like it might be another joke, the story is real.

Bezos told The Wall Street Journal,  "It's like a grandfather clock on a grander scale. When it's finished, it will play an elaborate cukoo-like sequence for the anniversary of every year, decade, century, millennium and 10 millennia.

"People who visit the clock when it is finished years from now will also be treated to a daily chime sequence that has been choreographed by musician Brian Eno (got that crossword fans), who serves on the project's board."

"The reason I'm doing it," says Bezos, "is that it is a symbol of long-term thinking, and the idea of long-term responsibility... We humans have become so technologically sophisticated that in certain ways we're dangerous to ourselves. It's going to be increasingly important over time for humanity to take a longer-term view of its future."

Impressive... in a vague, symbolic- sort-of way. And so is the 48-year-old Bezos.

But if the watch batteries in my story took two enormously big suitcases, how big will the batteries need to be for this 10,000-year clock? Pretty darned small in today's world is my guess. The constant, of course, is the quest for knowledge, place and perspective.