Seattle---part II: You have to love the street sculpture

Seattle's outdoor  sculpture is rich with humor and meaning. This, a cast aluminum piece by artist Richard Beyer dates to 1979 and is most often gayly decorated by the people. 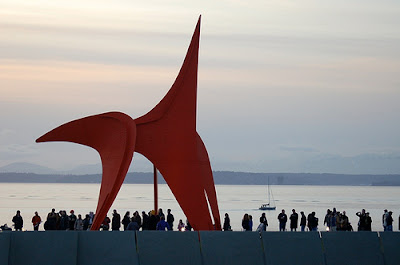 This Calder is in Seattle's Olympic Sculpture Park, a nine acre public space with permanent and visiting exhibits and incredible views of the Olympic Mountains and Puget Sound. It is in close proximity to Pike Place Market and admission is free.

One of my favorites:

This one is often called Troll Under the Bridge by Steve Badanes and others. It is an 18-foot mixed media piece sculpted in 1990 and sits under the north end of the Aurora Bridge. That is a real Volkswagen Beetle under its left hand and a real tourist under its right.

Perhaps the most interesting of the sculptures is this statue of Lenin. This bronze sculpture of Bolshevik Russian Communist revolutionary Vladimir Lenin stands 16 feet high in the Fremont neighborhood. It has a good story as told on Wikipedia.

It was constructed by a Slovak Bulgarian sculptor under commission from the Soviet and Czechoslovak governments. While following the bounds of his commission, the sculptor intended to portray Lenin as a bringer of revolution, in contrast to the traditional portrayals of Lenin as a philosopher and educator. His Lenin marches ahead fiercely, surrounded by torrid flames and symbols of war.

The work was completed and installed in Poprad, Czechoslovakia (now Slovakia), in 1988, shortly before the fall of Czechoslovak communism during the 1989 Velvet Revolution. The Poprad Lenin was not toppled in the demonstrations during the fall of communism. Instead, it was quietly removed from Lenin's Square several months after the Velvet Revolution.

Lewis E. Carpenter, a Washington resident who was teaching English in Poprad at the time, found the monumental statue lying in a scrapyard ready to be sold for the price of the bronze. In close collaboration with a local journalist, Carpenter approached the city officials saying that despite its current unpopularity, the sculpture was still a work of art worth preserving. He offered to buy it for $13,000. After many bureaucratic hurdles, he finally signed a contract with the mayor on March 16, 1993. With the help of the original sculptor, the statue was professionally cut into three pieces and shipped to the United States at a total cost of $41,000. Carpenter financed much of that by mortgaging his home.

On February 18, 1994 amidst the uproar in Seattle that was set off by the statue of a communist leader, Carpenter was killed in a car accident. The statue, now part of his estate, was left lying in his backyard. The family contacted a local brass foundry which offered to move it off the property. It now stands at the intersection of Evanston Ave N, N 36th St, and Fremont Place. This is just 3 blocks west of the Fremont Troll, another art installation under the Aurora bridge.

Fremont was considered a quirky artistic community, and like other statues in the neighborhood (such as Waiting for the Interurban, above), the Lenin statue is often the victim of various artistic projects, endorsed or not. A glowing red star and sometimes Christmas lights have been added to the statue for Christmas since 2004. For the 2004 Solstice Parade, the statue was made to look like John Lennon. During Gay Pride Week, the statue is dressed in drag. Other appropriations of the statue have included painting it as a clown, and clothing it in a custom-fitted red dress by the Seattle Hash House Harriers for their annual Red Dress Run.

It is a commanding, impressive work of art... and there are many more everywhere in the city. Public art is big in Seattle.

Scroll down to the previous post for more on Seattle, my favorite city.
Posted by Jerry C at 10:29 PM

Email ThisBlogThis!Share to TwitterShare to FacebookShare to Pinterest
Labels: Lenin, Olympic Sculpture Park, Seattle, The Troll, The Typewriter Eraser, Waiting for the Interurban