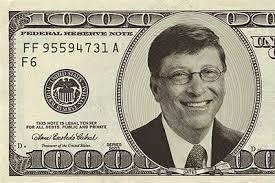 How rich? It has been said that Bill Gates is so rich that if he saw a $100 bill lying on the sidewalk, it would cost him more in the value of his time than to stop and pick it up. That rich. 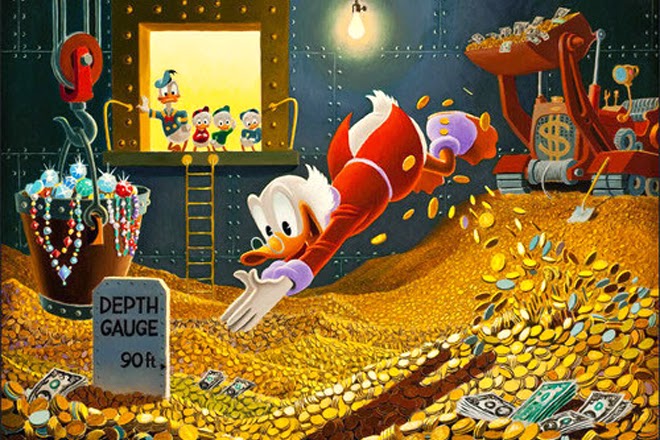 How rich? As rich as Scrooge McDuck, the world's richest avian, by far. The depth gauge of his gold coin cache is about 89 feet! That rich.

But I mean, what would I do with my "left over" billions? Bill Gates has said he will leave his children no more than $10 million (OK, that would be pretty good for most of us) instead of leaving them the billions he could. He wants his kids to still have to work for a purpose instead of being given a silver spoon for life. And he will donate the rest of his fortune good works. Who could not admire him for setting such a great example.

So what would I buy... I don't know because I could buy anything. But I know what I WOULDN'T BUY... 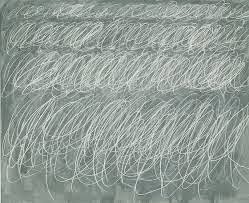 I wouldn't buy this... an untitled work of art by Cy Twombly which is part of his "Blackboard Series" because, I suppose, everything looks like a blackboard with scribbling on it. Asking price is "at least $35 million" at auction. On the positive side, it is a delightfully big work. I could afford it of course, but I feel it wouldn't soothe my soul as say, a large chocolate sundae.

I also am pretty sure I wouldn't buy this really nice Moynat Train Bag. It comes with shoulder straps and is cute as the dickins... a steal at $12,930 (plus tax). It could be a great 'man purse' because it was created with Pharnell Williams, who I really like. But it's just not me.

Then there is this really nice Louis Vuitton limited edition punching bag. Now before I tell you the how much it costs, you should know it comes with boxing gloves, a monogrammed mat to stand on when you punch and a carrying case for workouts when on the road. The price is 'about' $175,000. Hmm, the 'about' suggests to me that there may be some haggling room. I haven't punched the bag in person, of course, but if it is as nice as it looks, I wouldn't be surprised to see it in every Gold's Gym in the country.

Speaking of filth rich or not, did you know that the wealthiest 1% of the people in the USA possess 40% of the nation's wealth... and seriously, bully for them old chap.

That helps explain this: If you divide the United States by wealth, the top half represent 99 % of the dollars, the bottom half... you do the math. And that figure is down from 3 percent before our economic 'oopsie.' Actually, 50 million of us (15 %) live below the poverty level which is $23,550 according to Uncle Sam. About 3.5 million of us experience homelessness in a given year.

So, as an American, a firm believer in the Golden Rule and a person with a bothersome conscience, don't you think we should be able to do better than that?