*What politician running for office said: "If the people of Providence could read, I'd never get elected." ? 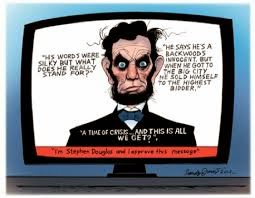 Almost three out of four (74%) of the political advertising running til Tuesday, November 4th are all about "the other guy."

Sadly, slamming the other candidate works! I guess that's how cynically divided we have become. And that's how we vote. The approval (disapproval) ratings for the most 'do nothing' Congress in our history is in the low teens, the worse ever. We have become as finitely divided as night and day. We don't even know how to spell the word 'kompromize.' And "For the good of the people" has become "For the good of the party."

Seems from Day 1, a congressperson's first priority is to get re-elected. So much of "governing" is spent gathering talking points--at our expense--to use as clubs for the next round of election campaigning. Yes, sincere and zealous candidates exist but the bar has been set so low, it doesn't take much or many to create an ugly, angry, untrusting electorate.

So maybe we've got it right. What thinking person could believe what any politician says today? Strange though, we choose to believe them when they denigrate their opponent. Haven't we gotten that a little backward?


Most political ads seem to show the opponent looking as if he or she has just had a very bad day. It is often a slightly out of focus black and white photo of a mad or stupid face and bad hair... the worse, the better... with a salacious headline to grab attention.

Half truths and less are highlighted to create the maximum unbelievable worse thing ever, often followed by a delightfully charming photo and closing comment from the opposition who paid for the ad: "I grew up castrating hogs on an Iowa farm. Washington's full of big spenders. Let's make 'em squeal. I'm (insert name) and I approve this message." (That's a real quote.)

And of course, there are millions of outside dollars spent by out-of-state strangers and special interests who don't give a darn about you or your state. They are only in it because they have lots and lots of money and want more. They want the candidate that will be beholden to their wants. These outsiders are telling us who we should vote for! Why? Because it works for them too.

Doesn't all of this sound wrong?

The Jimmy Stewart movie, Mr. Smith Goes to Washington, was released in 1939 and is still one people refer to as the way things should work. Truth is, that movie is very dark and only becomes remarkable in the last few minutes when (spoiler alert) one of the "bad" congressmen commits suicide in the cloak room. Yep, politics feel that 'out-of-sync' with every one of us waiting for the next 'got cha!' moment.

The media plays a role in spreading the divisiveness faster and more effectively and spectacularly than at any other time in our history--ratings, you know. Social media outlets give everyone an instant voice without need of fact or proof. We are gullible suckers happy to create sides that divide. Then we elect a President--any President--and tear him/her apart as best we can rather than uniting in even the smallest way to form One nation, under God... Beats me why anyone would even want the job. But thank goodness, some good people still do.

Whether we love or hate the Prez,... (you win some, you lose some) he/she is our leader for four years and deserves more respect than we give. It's the toughest job in the world. We will never all agree on anything but to want him/her to fail so we can say "I told you so!" is to say "Watch me shoot myself in the foot."

*Oh, the quote in the headline came from a Buddy Cianci story in the New York Times. He is the felonious former two-decade mayor of Providence who is again running for Mayor. Cianci, 74, is quite a colorful figure who moved rivers, took bribes, built a mall, was once accused of raping a woman at gun point, championed a popular festival that brought the city ongoing pride, assaulted a guy and tried to jab a lit cigaret in his eye, raised the city's self-esteem and spent five yeas in prison for running City Hall as a criminal enterprise. The sentencing judge called him Dr. Jekyll and Mr. Hyde, to which Buddy retorted, "He didn't give me two (expletive) paychecks."

When a restaurant owner ran afoul of Buddy and threatened to make an issue of a perceived unfairness, His Honor warned him, "You don't want to get into a pissing match with me, because you're a cup of water, and I'm Niagara Falls."

Know what? In his seventh run for mayor of Providence, RI, many think he will be elected once again. It's a miracle!

Well here's the bottom line: If we vote based on the ads we see and nothing more, then we get what we deserve. It's the ANGER and HATE that seem to be the constant, and that just kills us. We are always mad... always. And that's how we vote.

God bless the U.S.A. because we sure aren't doing our part.